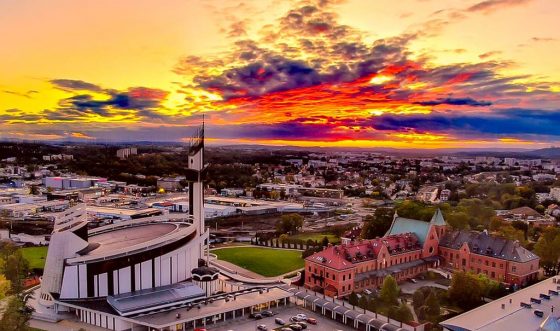 On May 8 we will be celebrating the 153th anniversary of the establishment, by Mother Teresa Ewa Countess Potocki nee Sułkowski, of the first house of the Congregation of the Sisters of Our Lady of Mercy in Krakow. The sisters became involved in the education of girls and women in need of deep moral renewal, first in the „House of Mercy” at the Church of Divine Mercy at Smoleńsk street, and then in the convent at the crossroads of Zwierzyniecka and Straszewskiego (now occupied by Hotel Radisson). Since 1891, the convent’s house has been in Krakow-Łagiewniki. Today, the sisters are performing more than their original work, being also involved in the mission of St. Faustina to proclaim the message of Mercy to the world. They do this not only at the Shrine of Divine Mercy among the pilgrims from around the world, but also through many new works: the Association of Divine Mercy Apostles „Faustinum”, the publishing company „Misericordia”, the quarterly magazine „Orędzie Miłosierdzia”, the website available in 8 languages, the online broadcasts from the chapel of the miracle-famous Divine Mercy image and the tomb of St. Faustina, the perpetual Chaplet, the Chaplet for the dying, presence in the media, social networking, visits to parishes in Poland and abroad, participation in symposia and conferences devoted to the Mercy of God and the heritage of St. Faustina, etc. Their ministry, even the most implicit, includes the proclamation of the message of the merciful Love of God to man.

Testimonies
I failed an exam in nursing school , i was giving an option to withdraw and go back to my country. I was lucky that it was during the time of divine mercy novena in preparation to Mercy Sunday, i joined in the novena. God helped me with someone who represented me in the school panel as i needed to state (...)
Npo, 2022-05-21
The Divine Mercy has brought me closer to God and his sufferings. I have had so many miracles in the last two years. I'm so peaceful knowing he is with me.
Claudia Scott, 2022-03-12
Once there was a terrible storm in the night when I was 12 years old. It scared me very much and to me it sounded as if the house would blow away at any moment. The thunder shook my bed and pictures on the wall.
So I took my beads and started praying the Divine Mercy chaplet. As I prayed, I could (...)
Addilyn, 2022-01-16
Read all testimonies   Add your testimony
‹ › ×
‹ › ×