20th Anniversary of Entrusting the World to Divine Mercy 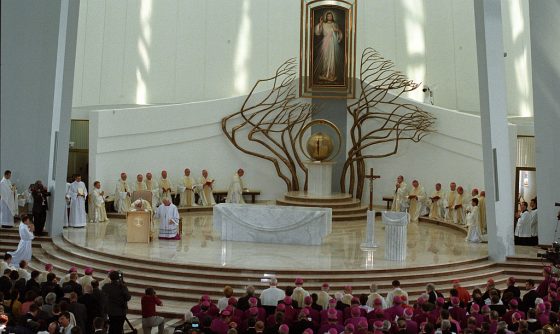 August 17th is the 20th anniversary of the entrustment of the world to Divine Mercy by Pope John Paul II during his last pilgrimage to Poland at the Shrine of Divine Mercy in Krakow-Łagiewniki. After the consecration of the basilica, the Holy Father uttered words in which he entrusted the fate of the world and every human being to God, the Father rich in Mercy. These words became a daily prayer not only for the sisters of the Congregation of Our Lady of Mercy and the pilgrims coming to the Łagiewniki Shrine, but also to millions of people in the world.

God, Father of Mercy,
Who revealed Your love in your Son, Jesus Christ,
And poured it upon us in the Holy Spirit the Comforter,
today we entrust to you the fate of the world and every human being.
Look upon over us sinners,
heal our weakness,
overcome all the evil,
let all the inhabitants of the Earth experience Your Mercy,
In You, the Triune God,
we have always found a source of hope.
God, Father of Mercy,
for your painful torment and the Resurrection of Your Son
have mercy on us and on the whole world.