23 Years Ago – the 1st Papal Pilgrimage to Łagiewniki 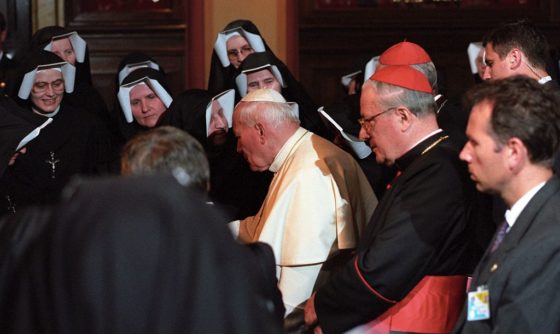 On June 7th, the 23th anniversary of the first pilgrimage made by Pope John Paul II to the Shrine of Divine Mercy in Krakow-Łagiewniki will be celebrated. The Pope prayed in front of the grace-famous painting of Merciful Jesus and at the tomb of (then Blessed) Sister Faustina. He also gave a short speech in which he conveyed many important matters. He said that nothing is more necessary to man than the Mercy of God. The pope added, that he took the message of Mercy from this place to the Holy See and that it shaped the image of his pontificate. He thanked for being able to fulfill the wish of Jesus concerning the introduction of the Feast of Mercy in Poland. In a special message addressed the sisters of the Congregation of Our Lady of Mercy, he encouraged them in their charismatic apostolic ministry, entrusted to him by Sister Faustina.

Testimonies
Pela intercessão de Santa Faustina fui curada do covid 19.
Obrigado minha amiga Santa Faustina por tanto cuidado para comigo.
Jesus eu confio em Vós!
Cristina Aparecida, 2021-10-05
I have been praying to Saint Faustina that I have a Bone Mineral Densitometry procedure on September 6, 2021 and I have been praying that the results will be good. I did the procedure and on September 13, 2021, the Doctor told me that its not bad. And I owe this to Jesus and Sister Faustina. AI am still (...)
Chrisnavi Comia, 2021-09-25
I am a witness to His grace and mercy.
Ofelia Antonio, 2021-09-24
Read all testimonies   Add your testimony
‹ › ×
‹ › ×