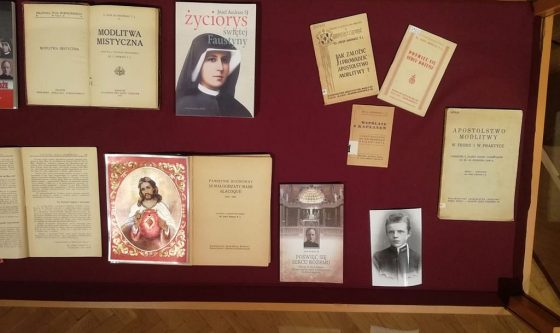 The Archdiocesan Museum in Tarnów has prepared an exhibition devoted to Fr. Joseph Andrasz, S.J., the Krakow confessor and spiritual director of St. Faustina, who became involved in the mission of proclaiming the message of Mercy after her death. Under his guidance, the painting of Merciful Jesus was created by Adolf Hyła, and is now famous for many graces in the Łagiewniki Shrine. On his initiative, immediately after World War II, memories of Sister Faustina were collected and a booklet titled Divine Mercy, we trust in You, popularizing the devotion to Divine Mercy in the forms St. Faustina provided was published. It has been translated into many languages and has contributed greatly to the popularization in many countries. The exhibition will present memorabilia connected with Father Andrasz – manuscripts, photographs and scientific publications, translations of many mystics and theologians of spirituality. There are also vestments with the image of the Sacred Heart of Jesus, the Jesuit religious habit, a breviary, rosary and walking stick which Fr. Andrasz used near the end of his life. The exhibition will be open until January 20, 2021.

Testimonies
My daughter and son were appearing for their final exams in college . I was reciting Chaplet of Divine Mercy daily . By God`s Grace , both of them cleared the exams with good marks . Also , thanking for many other favors received for the family .
Martin, 2021-08-04
I came back from my nurse practioner with excellent results of my lab work. Thank You Diving Mercy, St. Faustina & St. Therese of Lisieux, Pope John Paul the Great.
Kristen, 2021-07-06
I was so worried about my sons future. But my Lord blessed him with admission in college.
My brother mother and sister all we're affected by covid.
But my Lord touched them and healed then Amen
Mary, 2021-06-26
Read all testimonies   Add your testimony
‹ › ×
‹ › ×