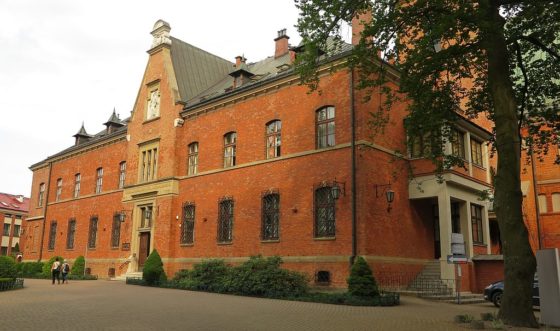 Another place of the revelations which took place at the Shrine of Divine Mercy in Krakow-Łagiewniki is the convent. Here, unusual meetings with the inhabitants of Heaven took place in bedrooms, the refectory, Mother Superior’s study, in the corridors or in the Congregation hall. The Lord Jesus communicated important information about the Message of Mercy with which He sent Sister Faustina to the world even in such mundane locations as a corridor leading to the convent’s kitchen. In mid-September 1936, Sister Faustina heard the great promise of the Chaplet of Divine Mercy here. Say unceasingly the chaplet that I have taught you, Jesus said. Whoever will recite it will receive great mercy at the hour of death. Priests will recommend it to sinners as their last hope of salvation. Even if there were a sinner most hardened, if he were to recite this chaplet only once, he would receive grace from My infinite mercy. I desire that the whole world know My infinite mercy. I desire to grant unimaginable graces to those souls who trust in My mercy (Diary, 687).

In the convent, Sister Faustina had dozens of meetings with Jesus, the Blessed Virgin, St. Thérèse of the Child Jesus and souls suffering in purgatory. On 15 August 1937, in the Congregation Hall, when sisters were reciting the August 15, 1937 the Act of Her election as the Heavenly Superior General of the Congregation, St. Faustina saw the Virgin Mary and this is how she described the event: Towards the end of the ceremony carried out in honor of the Mother of God, I saw the Virgin Mary, and She said to me, ‘Oh, how very pleased I am with the homage of your love!’ And at that moment She covered all the sisters of the Congregation with Her mantle. With Her right hand, She clasped Mother General Michael to herself, and with Her left hand She did so to me, while all the sisters were at Her feet, covered with Her mantle. Then the Mother of God said, ‘Everyone who perseveres zealously till death in My Congregation will be spared the fire of purgatory, and I desire that each one distinguish herself by the following virtues: humility and meekness; chastity and love of God and neighbor; compassion and mercy.’ After these words, the whole Congregation disappeared from my sight, and I remained alone with the Most Holy Mother who instructed me about the will of God and how to apply it to my life, submitting completely to His most holy decrees. It is impossible for one to please God without obeying His holy will. ‘My daughter, I strongly recommend that you faithfully fulfill all God’s wishes, for that is most pleasing in His holy eyes. ‘I very much desire that you distinguish yourself in this faithfulness in accomplishing God’s will.’ Put the will of God before all sacrifices and holocausts.’ While the heavenly Mother was talking to me, a deep understanding of this will of God was entering my soul (Diary, 1244. For more information, see Śladami objawień św. Siostry Faustyny w Sanktuarium Bożego Miłosierdzia w Krakowie-Łagiewnikach.