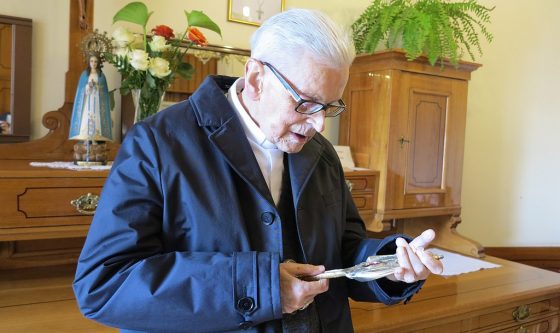 A photo exhibition has been arranged in the lower part of the Basilica at the Shrine of Divine Mercy in Krakow-Łagiewniki, titled Franciszek Cardinal Macharski – A Man of Mercy. The occasion for organizing this exhibition is the 5th anniversary of the retired metropolitan Bishop of Krakow’s passing away. Cardinal Macharski was a great venerator of Divine Mercy and Sister Faustina, which is why he chose “Jesus, I trust in You!” as his episcopal motto. As the pastor of the Archdiocese of Krakow, he took great care of the proper teaching of the Divine Mercy devotion and venerating St. Faustina, since, as he admitted: It is not just one more devotion, one more little book and a painting. Divine Mercy devotion is not comparable to anything else, and it is affecting world history, the history of mankind. No diplomacy, no politics, no human industry and skill can save what seems to be man-made doom impending no just on one human being, but on all humanity – except for Jesus, the Crucified and Resurrected. And I say through Mary. He was the first bishop to introduce the Feast of Divine Mercy in his diocese, in 1985. On 1 November 1992, he issued an official decree elevating the status of the convent chapel of St. Joseph to the rank of a Shrine of Divine Mercy, and 4 years later, he founded the Faustinum Divine Mercy Apostles’ Association. He was a patron and active participant of many theological symposiums and the International Congresses of Apostles of Divine Mercy organized in the Łagiewniki Shrine. He initiated and endorsed many books by granting his imprimatur, the first of which was the Diary of St. Faustina.