Scientific conference at the Łagiewniki Shrine 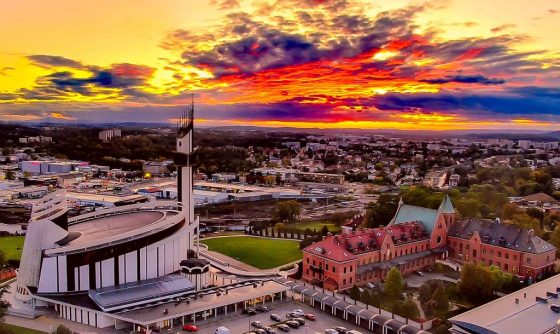 A scientific conference entitled Entrustment of the World to Divine Mercy – Significance and Perspectives will be held at the Shrine of Divine Mercy in Krakow-Łagiewniki (the John Paul II Hall) on November 26. It will be attended by Ewa Czaczkowska, PhD, of the Cardinal Stefan Wyszynski University in Warsaw, Father Wojciech Węgrzyniak, PhD, of the Pontifical University of John Paul II in Cracow, Father Paweł Ptasznik, PhD, rector of St. Stanislaus Church in Rome, Father Ass. Prof. Andrzej Dobrzyński, PhD, director of the Center for the Documentation and Study of the Pontificate of John Paul II in Rome, Father Stanisław Mieszczak, PhD of the Pontifical University of John Paul II in Cracow, Franciszek Mróz, PhD, of the Pedagogical University of Cracow, Father Zbigniew Bielas, PhD, rector of the Shrine in Krakow-Łagiewniki and its vice-rector, Father Mateusz Wyrobkiewicz. After the speakers, a panel discussion will follow on how much the message of God’s mercy and the act of entrusting the world to Divine Mercy can set the direction of the pastoral program for the contemporary Church in Poland and the world. It will be moderated by Fr. Jan Dohnalik, PhD, of the Cardinal Stefan Wyszyński University in Warsaw. After the Hour of Mercy and Holy Mass at 4:30 pm, an exhibition titled Mercy Hope for the World will be opened.