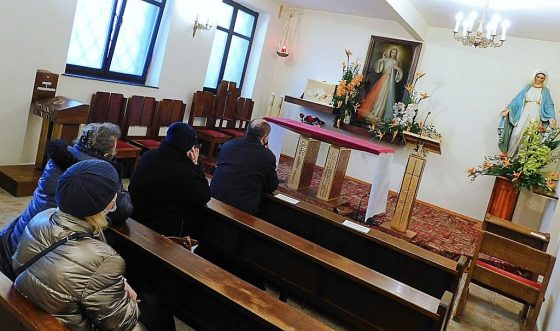 On 5 March at 5 p.m., a Holy Mass will be celebrated at the Shrine of Divine Mercy in Płock, for all those who were involved in the preparation and celebration of the 90th anniversary of the revelation of the Merciful Jesus image. The solemn Mass on February 22 was presided over by Archbishop Jan Romeo Pawłowski with all the bishops of the Plock diocese, priests, and with the participation of the Sisters of the Congregation of Our Lady of Mercy and the Divine Mercy venerators, most of whom, due to sanitary rigors, enjoyed the broadcast of the Catholic Radio of the Płock Diocese. Pope Francis and President Andrzej Duda sent words to the participants on this occasion. “We are aware that if it were not for the favor, help and disinterested involvement of many people, including workers in the construction of the new temple, the entire year of preparations and the celebration itself could not have taken place in such a solemn atmosphere,” wrote the superior of the Plock convent of the Congregation of Our Lady of Mercy, Sr. M. Diana Kuczek, in her letter of thanks.