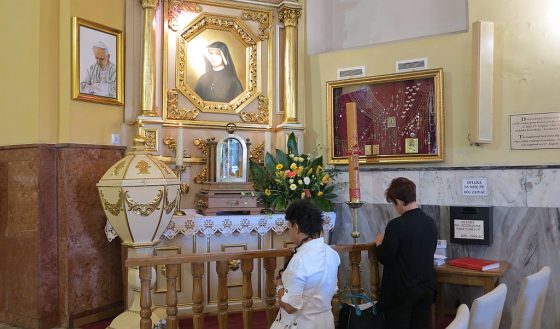 This took place in Świnice, on 27 August 1905, at one o’clock in the afternoon. Stanisław Kowalski, a farmer aged 40 from Głogowiec, in the presence of Franciszek Bednarek, aged 35 and Józef Stasiak aged 40, both farmers from Głogowiec, appeared and showed us the female child born in the village of Głogowiec on August 25 this year, at eight o’clock in the morning, of his wedding wife Marianna née Babel, aged 30. This child received, at baptism held today, the name Helena, and her godparents were Konstanty Bednarek and Marianna Szewczyk. This description of the rite of baptism from parish records was left by the parish priest, Father Józef Chodyński, who baptized the little Helena Kowalska. The certificate was drawn up in the Russian language, because it was still the time of the Partitions of Poland, when the country was not to be seen on the political map of Europe. Baby Helena’s father, Stanisław Kowalski, signed this record in Polish. The godparents, who were illiterate, confirmed their signatures by lacing an X on the form. In the former parish church, today the Baptismal Shrine of St. Faustina, you can see the same font at which the little Helena Kowalska became a child of God and a member of the Mystical Body of Christ, baptized two days after her birth, on the eve of the feast of Our Lady of Czestochowa. The grace of baptism was further developed in her life as she achieved the fullness of mystical union with God here on Earth. Today, she is venerated as an apostle of Divine Mercy, because Jesus chose her as a prophet of our time, and sent her into the world with the message of Mercy.