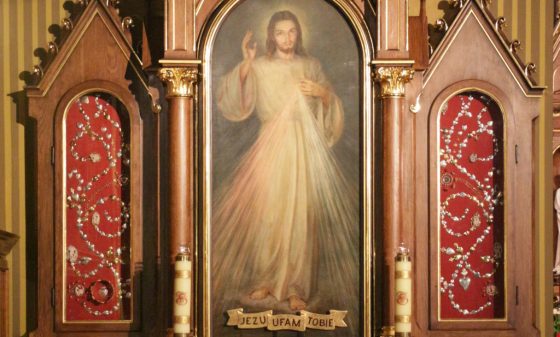 The picture of the Merciful Jesus has been one of the most well-known images of the crucified and risen Christ in the history of the Church and in the contemporary world. This is an unusual picture not only because of the fact that it is the most popular one but, above all, because the Lord Jesus Himself is its coauthor. On the 22th February, 1931, in a cell of the convent of the Congregation of the Sisters of Our Lady of Mercy in Płock, He appeared to Sister Faustina – she saw Him just as He is represented in the image and He commanded her to paint His picture according to the vision. She wrote about this in her 'Diary’: “In the evening when I was in my cell, I saw Jesus clothed in a white robe. One of His hands was raised in a gesture of blessing, and with the other He was touching the robe on His chest. There were two big rays, one red and the other pale, emerging from a fold in the robe on His chest. …After a while Jesus said to me, «Make Me a picture of this image in the form that you see, with the inscription Jesus, I trust in You. I want this picture venerated first in your chapel, and in the whole world»”(Diary 47).

Thus, the image was painted because Jesus Himself had desired that. The picture is both a sign and a visual synthesis of the whole Divine Mercy message, which He conveyed by Sister Faustina: on the one hand it reminds us of the mystery of God’s merciful love for man revealed in the Holy Scriptures, it exhorts us to form the Christian attitude of trust towards Him and mercy towards neighbour and, on the other hand, it is a vessel for drawing graces to which He attached many promises. A general promise of all possible graces and rewards in this world (provided that they are in accordance with God’s will) as well as specific promises: the grace of eternal salvation, great progress on the path of Christian perfection and the grace of peaceful death – these are the promises Jesus attached to a prayer said in front of the image on condition that it is said with trust and that it is conjoined to deeds of mercy towards neighbour.

In 1934 the first image of the Divine Mercy was painted under Sister Faustina’s direction in the studio of a Vilnius artist, Eugeniusz Kazimirowski. Since that time many different versions of the image of the Merciful Christ according to Sister Faustina’s vision have been painted. They can be found in churches and chapels all over the world. The picture which is displayed in the convent chapel of the Congregation of the Sisters of Our Lady of Mercy in the Shrine of the Divine Mercy in Cracow-Łagiewniki and which is renowned for the graces received by means of it, holds a special place in this iconography and in the Divine Mercy devotion: although it is neither the first picture painted under Sister Faustina’s direction nor the first image displayed in the chapels of her Congregation, Jesus’s will: “I want this picture vener[1]ated first in your chapel, and in the whole world” (Diary 47) has been fulfilled by means of this picture. This image of Christ is greatly honoured by the faithful, it is renowned for many graces and its copies as well as reproductions can be found everywhere, on all the continents.