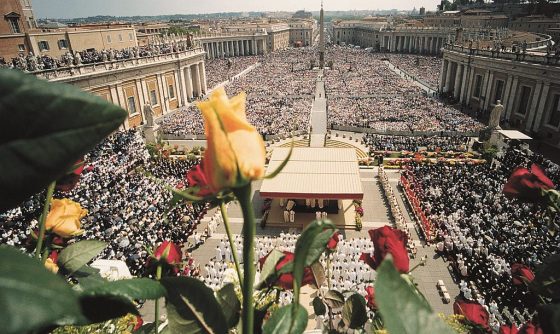 April 30th is the 22th anniversary of the canonization of Sr. Faustina Kowalska from the Congregation of Our Lady of Mercy, an apostle of Divine Mercy. Her canonization took place at St. Peter’s Square in Rome and at the Shrine in Krakow-Łagiewniki in the year 2000. Saint Faustina described the event with details more than 60 years earlier, at the end of March 1937 (Diary, 1044-1048). Whoever participated in these events knows that her vision was fulfilled accurately. On that day, the Holy Father John Paul II introduced the Feast of Divine Mercy for the whole Church and provided it with the message of Mercy as articulated by St. Faustina for the third millennium of our faith. You can find out more the testimony of miraculous healing which was tested for the canonization, a description of the event and the canonization homily of the Holy Father at faustyna.pl. We give daily thanks for this “gift of God our time”, as St. Faustina and the message of Mercy which she provided us with were called by St. John Paul II. Millions of people around the world are joining in St. Faustina’s prophetic mission of proclaiming the biblical truth about the merciful Love of God to the world through the witness of life, deeds, words and prayer, creating the Apostolic Movement of the Divine Mercy, which is the “new congregation” as demanded by Jesus. May the anniversary of the Apostle of Divine Mercy’s canonization be an opportunity for us not only to give thanks, but also to explore the abundant heritage of the Saint.