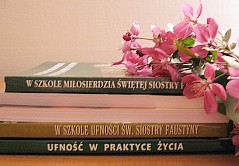 The main emphasis in the Association’s activity is on formation, which aims at introducing Faustinum members into the spirituality and apostolic mission of the Congregation in order to prepare the apostles of The Divine Mercy to lead independent interior lives and undertake properly understood apostolic work in the spirit of St. Sister Faustina’s charism.

The basic formation programme lasts four years and consists of three cycles: the biblical cycle, the interior life, and the spirituality and mission of St. Faustina. Year One covers the foundations relating to the mystery of divine mercy, the essence of the interior life and the means leading to its development, as well as the spirituality and mission of St. Faustina. Year Two of the formation programme focuses on the motto: In the School of Trust. Year Three is the School of Mercy, and finally Year Four – the School of Man’s Cooperation with The Divine Mercy. The individual topics are prepared on the basis of Sacred Scripture, the teaching of the Church, and the Diary of St. Faustina. The above topics are presented in an abbreviated form in the quarterly magazine Orędzie Miłosierdzia (The Message of Mercy) on pages 12-17. Besides the monthly conferences and lectures, there is also a so-called Practice relating to the interior life. As they follow in the footsteps of St. Faustina, we suggest to those participating in the formation

The formation is conducted both communally and individually. The community sessions take place in the Shrine of The Divine Mercy in Kraków-Łagiewniki, in some houses of the Congregation of Our Lady of Mercy, as well as in numerous parishes in Poland and abroad. Formation in community in a parish becomes possible when there is a group of persons in a parish who belong to the “Faustinum” Association as well as a priest who is prepared to conduct the formation according to the Association’s mandatory programme.

If someone is unable to take part in the formation which is conducted in a community, then he or she may study individually, by asking for formation materials directly from the Faustinum secretariat. 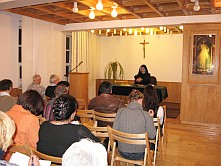 The basic formation programme is supported by a retreat conducted according to the level of formation. During the retreat, topics belonging to the biblical cycle are touched upon as well as selected issues from the cycle of the interior life and the spirituality and mission of St. Faustina. The formation process is supported by the so-called days of recollection, by numerous books and materials published by the “Misericordia” Publishing House of the Congregation of the Sisters of Our Lady of Mercy, as well as by the quarterly Orędzie Miłosierdzia (The Message of Mercy).

At the end of the four-year formation programme, members are obliged to take an exam. Those members who pass the examination with a positive grade have the right to wear the badge of the Association and also pass on to the phase of permanent formation.

At present, the formation is conducted in Polish, English, German, French, Czech, and Slovak. Also Slovenes, Hungarians and Spaniards are profiting from the programme, as they have had the formation materials translated into their respective native languages.

In those areas where there are no sisters from the Congregation of Our Lady of Mercy, it is priests who take upon themselves the responsibility of giving the formation; they are obliged to conduct the formation in accordance with the programme prepared by the “Faustinum” Association.