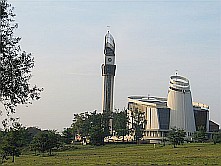 The rapid development of the devotion to The Divine Mercy and the many pilgrimages to the Shrine in Łagiewniki as a consequence of the beatification of Sister Faustina, led to the laying of the Foundation in 1966 by the Archbishop of Kraków, Cardinal Franciszek Macharski. The aim was to build a new church (for 5,000 persons) together with facilities for pilgrims. A year later, on 7 June 1997, during his visit to Łagiewniki Shrine, the Holy Father John Paul II blessed the cornerstone brought from Calvary for the construction of the church. He also viewed a model showing the planned development of the place and added his signature to it. On 17 August 2002, during his final pilgrimage to Poland, he consecrated the new church and there he entrusted the whole world to God’s Mercy. Since 6 March 2003 the church has held the title of Minor Basilica. 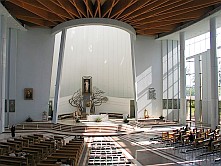 Built according to the design of Witold Cęckiewicz, the basilica, resembles a ship and can be associated with a contemporary “ark of the covenant”, in which everyone who puts their hope in the mercy of God can find salvation. In the chancel behind the large stone altar there is a tabernacle in the shape of the globe with continents outlined on it. The tabernacle is surrounded by a bush tossed by strong winds, symbolizing the modern world or man confused by different currents. The image of Merciful Jesus (by Jan Chrząszcz) stands within the bush above the tabernacle, reminding one that “in the mercy of God the world will find peace and mankind will find happiness” – as the Holy Father John Paul II said. Some people see in the Shrine interior a symbolic representation of the burning bush from which God spoke to Moses. As God spoke to Moses in the past, so in our times God has spoken through St. Sister Faustina, proclaiming the prophetic message of Mercy for the Church and the world. To either side of the chancel, on the walls that form part of the nave, you find facing you on the left the image of Our Lady of Mercy of the Gate of Dawn (by Jan Chrząszcz); and on the right, words spoken by the Holy Father John Paul II in this basilica on 17 August 2002 as a part of the act of entrusting the world to The Divine Mercy.

Stained-glass windows are installed in the vertical window spaces and above the choir. The 148 square metre window ​​above the choir is the largest stained-glass window in Kraków. It shows a huge sun, against which one can see a luminous cross – a symbol of faith and the most meaningful sign of The Divine Mercy. Below the horizon is the sea, the colours of which harmonize with the stained-glass windows at the side of the basilica. These windows are intended to create a feeling of rising from the depths of the sea. The stained glass was designed by the architect of the Łagiewniki basilica, Prof. Witold Cęckiewicz and by the artist Małgorzata Toborowicz. 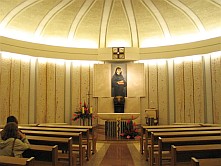 Five beautiful chapels are located in the lower part of the basilica. They are arranged in a circle, and their decor is a gift from the churches of European countries. In the centre is the chapel dedicated to Saint Sister Faustina, the decor of which is a gift of the Italian Episcopate (hence the name “Italian Chapel”). In the chapel behind the altar there is a tabernacle in the shape of an opening flower, which refers to the words of the Divine Mercy Apostle, saying that “the Love of God is the flower – Mercy the fruit” (Diary 949). Above the tabernacle there is a picture by Jan Chrząszcz of St. Sister Faustina, with her Diary placed in the altar setting in the shape of an open book. Before the altar there is a particle of the relics of St. Sister Faustina placed in a reliquary in the shape of a rose. The altar, pulpit and the base of the reliquary are made of pale travertine, the walls are lined with Polish sandstone slabs, the flooring radiating from the centre echoes the main part of the basilica, and is designed to remind one of the rays in the image of Merciful Jesus, symbolizing all graces. The whole chapel is topped with a dome. Cardinal Camillo Ruini, President of the Italian Episcopal Conference, carried out the ceremonial consecration of this chapel, on the hundredth anniversary of the baptism of St. Sister Faustina and on the day when Cardinal Stanislaw Dziwisz, Archbishop of Kraków, made his ceremonial entrance into the Wawel Cathedral, on 27 August 2005. 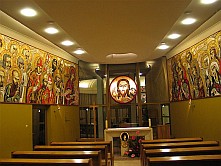 The Communio Sanctorum cha- pel is located to the right of the entrance, in the bottom part of the basilica. During the national pilgrimage of the Hungarians on 9 October 2004 it was consecrated by the Hungarian primate, Cardinal Péter Erdó, together with the Cardinal Franciszek Macharski, the Archbishop of Kraków. The interior of the chapel is the gift of the Hungarian Church, hence its popular name The Hungarian Chapel. It is decorated with beautiful mosaics on the side walls, showing more than sixty saints and blessed men and women of Hungary, Poland and other European countries, who wrote the most beautiful pages in the history of the Church. Another group of the saints and the blessed is accompanied by the text of the Beatitudes from the Sermon on the Mount, which reads like a commentary on their lives. Mary, Mother of God, leads the procession of saints. Above the marble altar there is a mosaic of the Merciful Jesus with St. Sister Faustina listening intently to His words, and around its edges the words, Jesus, I trust in You, in many languages​​. Before the altar, in a reliquary in the shape of a right hand, there is a relic of St. Stephen, King of Hungary. A Hungarian artist, a Greek Catholic (Uniate) priest, László Puskás, and his wife, designed the chapel and its decoration. 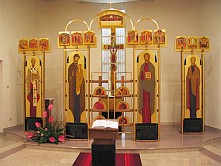 On the right, next to the Communio sanctorum chapel, there is the chapel of St. Andrew the Apostle, which is a gift of the Greek Catholic (Uniate) Church from Poland and the Ukraine. The iconostasis with the image of St. Andrew, the patron saint of the Eastern Church, is the work of the Ukrainian artist Lubomir Medwid. The chapel is also adorned with rich polychrome made in the spirit of the Eastern tradition, and containing the message associated with the history of the Church. Painting compositions by Timur Karim and Małgorzata Dawidiuk show: the Cathedral of Our Lady, the Baptism of Rus’ (Ukraine), the Old Testament Holy Trinity (the Hospitality of Abraham), Christ Acheiropoietos (Mandylion, Image of Edessa) and the Feast of the Cross. The Archbishop of Przemyśl-Warsaw Archbishop Jan Martyniak and Cardinal Stanislaw Dziwisz, Archbishop of Kraków, made the ceremonial dedication of the chapel on 24 June 2007. 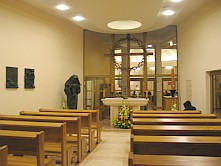 The Holy Cross Chapel is on the left side of the entrance to the lower part of the basilica, and the faithful in Germany participated in the design of this chapel, hence the name “German Chapel” is also used. A large cross with a crown of thorns in the chancel of the chapel attracts the attention of the faithful. The walls carry the Stations of the Cross. The Cross and the images of the Passion of Jesus are the fullest expression of the merciful love of God to mankind. 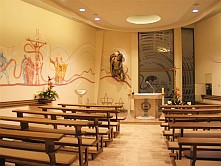 On the left side, next to the Chapel of the Holy Cross, is the Chapel of Our Lady of Sorrows, whose decor is a gift of the Church in Slovakia, and therefore it is also called “The Slovak Chapel”. Its interior, designed by architect Marian Sitarčik, is domina- ted by a beautiful Pieta sculpted by Jan Lesňák. The walls are decorated with frescoes showing the seven sorrows of Our Lady painted by Peter Čambál and the words of the “Magnificat” in the liturgical languages of the Church in the days of the Apostles of the Slavs St. Cyril and Methodius: Old Church Slavonic, Latin, Greek and Hebrew, and in the Slovak language. A glass wall behind the altar is covered with an engraving showing the burial of the Lord Jesus and His Resurrection. The chairman of the Slovak Episcopate Bishop František Tondra, Prince-Bishop (Vladika) Jan Babjak, Greek Catholic Archbishop of Presov, and Cardinal Stanislaw Dziwisz, Archbishop of Kraków, made the ceremonial dedication of the chapel during the national pilgrimage of Slovaks on 19 April 2008. 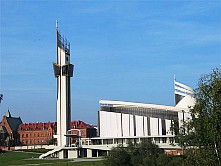 A 76 meter high tower, topped with a cross, stands before the basilica. A viewing platform, at a height of over 40 metres, provides a panoramic view of the city and the surrounding area, and, given good visibility, even the Tatra Mountains. One can go up on foot (315 steps), or use the elevators. Above the entrance to the tower there is a monument of the Holy Father John Paul II (designed by Witold Cęckiewicz), showing the Pope as a pilgrim of peace, holding in his hands a dove that will carry the message of Mercy to the world. The monument was unveiled on 27 May 2006 during the pilgrimage of Pope Benedict XVI to Łagiewniki Shrine. 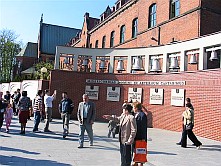 Nine carillon bells have been hung above the walls at the front of the basilica. The tune played by the bells is intended to remind us of the mercy of God. The following names are inscribed on the bells: Jesus, St. Sister Faustina, John Paul II and the saints of Kraków: St. Stanisław, St. Hyacinth, St. Jadwiga, St. John Cantius, St. Rafał Kalinowski and St. Brother Albert. The bells were blessed by Cardinal Stanisław Dziwisz, Archbishop of Kraków, on the Feast of Mercy in 2009.