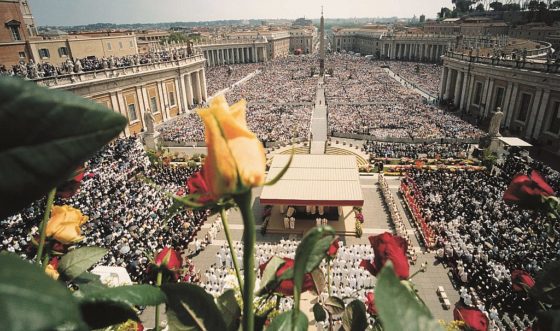 In her ‘Diary’ Sister Faustina depicted the canonization ceremony many years before the event took place. Although she did not know the invention of the television or the telebridge – communication through a satellite – on the 23rd March, 1937, she had a vision during which she saw that the ceremony would take place in Rome and in Cracow simultaneously. Thanks to technological inventions, the participants in the canonization ceremony, which took place on the 30th April, 2000, were able to experience it at the same time whether they were in Rome or in Cracow. Therefore, her prophetic vision of the canonization ceremony in Rome and Cracow, as well as the prophecy that the Feast of Mercy would be instituted for the whole Church, were fulfilled. This is how Sister Faustina described the ceremony herself:

“Suddenly, God’s presence took hold of me, and at once I saw myself in Rome, in the Holy Father’s chapel and at the same time I was in our chapel. And the celebration of the Holy Father and the entire Church was closely connected with our chapel and, in a very special way, with our Congregation. And I took part in the solemn celebration simultaneously here and in Rome, for the celebration was so closely connected with Rome that, even as I write, I cannot distinguish the two but I am writing it down as I saw it. I saw the Lord Jesus in our chapel, exposed in the monstrance on the high altar. The chapel was adorned as for a feast, and on that day anyone who wanted to come was allowed in. The crowd was so enormous that the eye could not take it all in. Everyone was participating in the celebrations with great joy, and many of them obtained what they desired. The same celebration was held in Rome, in a beautiful church, and the Holy Father, with all the clergy, was celebrating this Feast, and then suddenly I saw Saint Peter, who stood between the altar and the Holy Father. I could not hear what Saint Peter said but I saw that the Holy Father understood his words…

Then suddenly, I saw how the two rays, as painted in the image, issued from the Host and spread over the whole world. This lasted only a moment, but it seemed as though it had lasted all day, and our chapel was overcrowded all day long, and the whole day abounded in joy.

Ten suddenly I saw on our altar the living Lord Jesus, just as He is depicted in the image. Yet I felt that the sisters and all the people did not see the Lord Jesus as I saw Him. Jesus looked with great kindness and joy at the Holy Father, at certain priests, at the entire clergy, at the people and at our Congregation.

Then, in an instant, I was caught up to stand near Jesus, and I stood on the altar next to the Lord Jesus, and my spirit was filled with a happiness so great that I am unable to comprehend it or write about it. A profound peace as well as repose filled my soul. Jesus bent toward me and said with great kindness: What is it you desire, My daughter? – And I answered – I desire worship and glory be given to Your mercy. – I already am receiving worship by the institution and celebration of this Feast; what else do you desire? I then looked at the immense crowd worshipping the Divine Mercy and I said to the Lord: Jesus, bless all those who are gathered to give glory to You and to venerate Your infinite mercy. Jesus made a sign of the cross with His hand, and this blessing was reflected in the souls like a flash of light. My spirit was engulfed in His love. I felt as if I had dissolved and disappeared completely in God. When I came to myself, a profound peace was flooding my soul, and an extraordinary understanding of many things was communicated to my intellect, an understanding that had not been granted me previously” (the Diary 1044-1048). 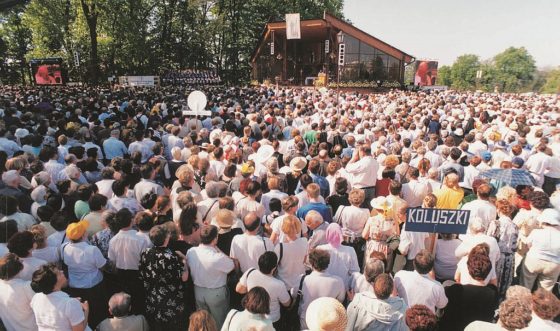 Sister Faustina’s prophecy pertaining to her canonization has been fulfilled. She wrote that the ceremony would take place simultaneously in Rome, with the Holy Father, as well as in the convent, in Cracow-Łagiewniki. This was a ceremony for the whole Church, she took part in it and the crowd was so enormous that the eye could not take it all in. The prophecy was fulfilled not only as far as the spiritual union of the pilgrims at Saint Peter’s Square and those in the Shrine in Cracow-Łagiewniki was concerned but also they were audio-visually linked. On big outdoor screens the picture and sound were broadcast from both places – that is why Łagiewniki was present at Saint Peter’s Square and Saint Peter’s Square was present in Łagiewniki. The pilgrims were able to participate actively in the canonization ceremony thanks to booklets with prayers, songs and commentaries which had been printed for this event.

The people reacted enthusiastically when it was announced that Sister Faustina had become a saint of the Church. The crowd of pilgrims from Poland and from many other countries expressed their joy and gratitude by clapping and singing in the sanctuary in Cracow. The inscription: SAINT was unveiled on Sister Faustina’s reliquary. On that day there was a long queue to the picture of the Merciful Jesus, which is renowned for graces, and to Saint Faustina’s relics. The security personnel did not allow people to pray too long in order to enable others who were waiting in front of the chapel to go in, look at the image of the Merciful Jesus and pay homage to Saint Faustina’s relics at least for a moment. People waited for a long time in prayer for this moment.

They were not only happy that Saint Faustina had become a saint – on that day they came to know that the Feast of Mercy had been instituted for the whole Church and they were delighted for that reason, too. The Holy Father, John Paul II, spoke about it in his homily and the pilgrims in Rome and Cracow responded with thunderous applause. For many years they had prayed for this and now, in the Jubilee Year, this wish of the Lord Jesus was fulfilled. Since that year the whole Church has been celebrating the first Sunday after Easter as Divine Mercy Sunday.

The pilgrims who took part in the canonization ceremony – those gathered in the Shrine of the Divine Mercy in Cracow – experienced it as if they really participated in the event in Rome. It really seemed to them that they took an active part in the ceremony led by the Holy Father. The space, distance, place and time did not matter. Although they stood many hours in the scorching sun they did not feel tired – they were happy because they had received graces and this joy was greater than human suffering.

Having prayed Regina Coeli with the Holy Father and having listened to his blessing, Bishop Kazimierz Nycz from Cracow thanked him for the gift of the canonization of Sister Faustina, for the institution of the Feast of Mercy for the whole Church, and for his blessing for the development of the Sanctuary of the Divine Mercy in Łagiewniki. The pilgrims joined in and thanked the Holy Father by singing: “Cracow loves you, Cracow greets you, Cracow thanks you and, later: Poland loves you, Poland greets you, Poland thanks you”. The Holy Father was clearly moved and he said to the pilgrims in Łagiewniki: “God’s Providence connected Saint Faustina’s life with Vilnius, Warsaw, Płock and Cracow. I commend all inhabitants of the cities, all my compatriots and the Divine Mercy worshippers to God”. These words brought about another ovation and the pilgrims gathered in Saint Peter’s Square followed the ones present in Łagiewniki by singing the Hallelujah joyfully.

Over 150,000 pilgrims from Poland and many other countries, including the Czech Republic, Slovakia, Ukraine, Germany, the Principality of Liechtenstein, the USA and the Philippines came to the sanctuary in Cracow-Łagiewniki. All the day they were served by: over 200 priests, Franciscan seminarians, Jesuits, Capuchins, Michaelites, Missionaries of La Salette, choirs (including Organum and Mariański choir), over 100 sisters of the Congregation of the Sisters of Our Lady of Mercy, sisters from other congregations, the Polish National Railways, the police, the municipal police, the urban transport operator, medical service (Maltese youth, municipal health service, Knights Hospitallers) and security personnel, who were also joined by secondary school children. As regards the media, a few dozen journalists and news photographers worked at the ceremony. The Polish TV broadcast not only the canonization ceremonies but also the prayer at the Hour of Mercy.

Despite the fact that they were tired, the organizers and the pilgrims radiated joy – maybe because Saint Faustina’s prophecy was being fulfilled: many of them obtained what they desired.