Cardinal Franciszek Cardinal Macharski Went to the House of the Lord 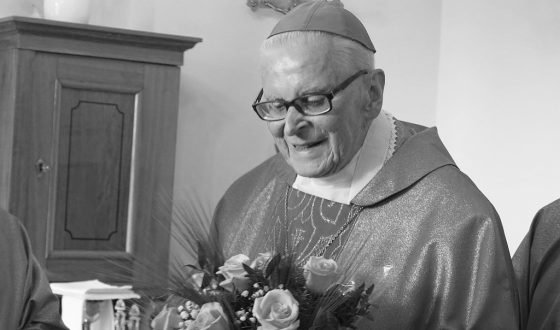 On August 2, on the liturgical commemoration of Our Lady of the Angels, Franciszek Cardinal Macharski, retired Metropolitan Bishop of the Archdiocese of Krakow, a great venerator of Divine Mercy and St. Faustina, Apostle of Divine Mercy, faithful in his life and ministry to the call “Jesus, I trust in you!”, departed to the house of the Lord. He became acquainted with devotion to Divine Mercy already during World War II. He learnt about the message of mercy that Jesus entrusted to Sister Faustina a little later. This early discovery of this treasure, which God has placed in Łagiewniki after the death of St. Faustina Kowalska, the Cardinal incorporated into his life, sharing it until the end. As a shepherd of the Archdiocese of Krakow, he most of all cared about the correct proclamation of the message of Divine Mercy and St. Faustina. He confessed: This is not just one more kind of devotion. It is not just one more book and image. The Divine Mercy devotion is incomparable to anything else as it decides about the fate of the world, the fate of humanity. No diplomacy, no politics, no human ingenuity and ability will save that what seems to be ruined due to the acts of man, not just to one man, but to humanity, except Jesus, the Crucified and Risen. And I say: through Mary. He established the feast of Divine Mercy in his diocese in 1985 as the first Archbishop in the world. On November 1, 1992 he issued an official decree raising the chapel of the convent church dedicated to St. Joseph to the rank of a Shrine of Divine Mercy. He cared about the development of the veneration of Divine Mercy at the Shrine. He frequently celebrated solemn church services in honor of God’s Mercy on the third Fridays of the month. He hosted and participated in a number of theological symposia, International Congresses of the Apostles of Divine Mercy, and in 1996, he founded the “Faustinum” Association of Apostles of the Divine Mercy, so that the Sisters of Our Lady of Mercy could more fruitfully share the message of Mercy with the world, together with its members. In 1996, he also established the Foundation for the Expansion of the Shrine, and then the Rectorate for priests who could at this point continually serve pilgrims at the confessional and at the altar. Even as Rector of the Major Seminary in Krakow, he made regular pilgrimages to the tomb of the Servant of God, Sister Faustina. He took care of matters related to her beatification and canonization, enjoyed the development of the veneration of Divine Mercy and the arrivals of millions of pilgrims at the Łagiewniki Shrine. In this holy place, the Cardinal also presided over the ceremonies of annual and perpetual vows. He supported all the apostolic activities of the Congregation of Our Lady of Mercy, which were associated with the proclamation of the message of Mercy to the world. He gave his imprimatur to a number of publications, the first of which was the Diary of St. Faustina. On his initiative, the first major prayer book to God’s Mercy entitled “Bóg bogaty w miłosierdzie” [God Rich in Mercy] appeared. He supported the initiative of issuing the magazine “Orędzie Miłosierdzia” [“Message of Mercy”] and many other activities that encouraged awareness of the great gift of God that is St. Faustina and the message of Mercy. During his illness, when he came to Łagiewniki on a less regular basis, the Cardinal continued his interested in what was happening at the holy site, what was being done, and he supported the great work that God began through St. Faustina by his prayer and suffering. He celebrated his last Mass at the altar of the miracle-famous image of Merciful Jesus and the tomb of St. Faustina on his 89th birthday, May 20. This Mass was concelebrated, among others, by M. Cardinal Jaworski, Bp. Jan Zając and Bp. Grzegorz Ryś. “Blessed are the merciful, for they shall obtain mercy.”