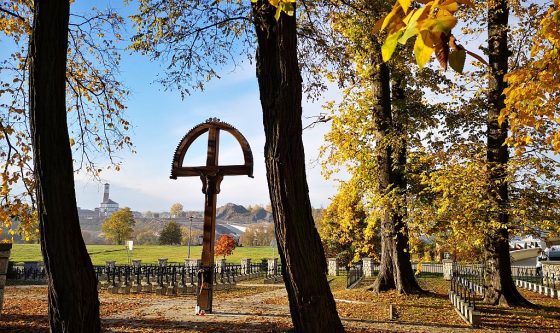 The Shrine in Łagiewniki has one of Krakow’s oldest cemeteries. It is a religious cemetery established in the late 19th century in the back of the former garden of the Congregation of the Sisters of Our Lady of Mercy. Here lie the remains of sisters, chaplains, pupils and other persons connected with the convent in Łagiewniki. Also the body of St. Faustina used to be buried here for 28 years. Another Sister who was interred here is Sr. Faustina’s Superior General, Mother Michael Moraczewska. Others include Sr. Kaliksta Piekarczyk who devoted her life for the intention of saving Krakow during World War II, Mother Ksawera Olszamowska who offered hers for the intention of establishment of the Feast of Divine Mercy in the Church and the message of Mercy, along with many sisters who offered up their daily lives for different intentions. The Convent’s cemetery is right outside the southern wall of the basilica in the Łagiewniki Shrine and is often visited by pilgrims. Near the eastern wall of the basilica, there is a military cemetery from the time of WWI. No individual graves are found here. Instead, there is a large cross and an obelisk with a plaque which says that 266 soldiers from 15 European countries are buried in this place. During the Great War, part of the Congregation’s garden was converted into a large military hospital for over 1,000 patients. It had several temporary wards, where soldiers of different nationalities were treated for typhoid fever, cholera, dysentery, pox and scarlet fever – in other words, infectious diseases. Some of the soldiers who could not be saved died in this hospital, which was why they were buried in the cemetery outside the Convent’s wall.