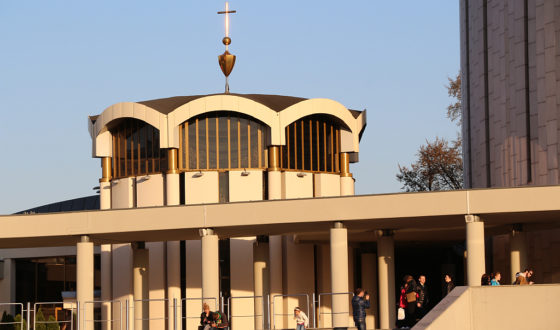 The Chapel of Perpetual Adoration is located next to the basilica, built according to the design by Witold Cęckiewicz. The chapel resembles a rotunda with stained-glass windows from top to bottom and is decorated with floral design. The altar is set in the centre in the shape of a blazing fire, inside which stands a monstrance; and a perpetual lamp with the fire of Mercy burns over the monstrance. On 16 December 2003 the fire was lit by the Holy Father John Paul II as a sign of the message of God’s Mercy spreading from this place to the whole world. The chapel was consecrated by Cardinal Franciszek Macharski on the Feast of The Divine Mercy in 2004 and it was then that the all-day adoration of the Blessed Sacrament began. One year later, on 3 April 2005, the desire of the Holy Father John Paul II was fulfilled – relating to the perpetual adoration of the Blessed Sacrament in this Shrine. In a letter prepared for the occasion, just before his death, so as if in his last Will, he wrote: “I am glad that the perpetual adoration of the Blessed Sacrament will begin this Sunday. Nothing makes the work of mercy, which was accomplished through the Cross and Resurrection, more present than the Eucharistic presence of the Lord. May this presence, therefore, be a source of strength and hope for all pilgrims.” Since then the Shrine of The Divine Mercy in Łagiewniki is open continuously, since day and night pilgrims from Krakow, from all over Poland, and even from other countries pray before the Blessed Sacrament, imploring God’s mercy for themselves, for Holy Church, for Poland and for the whole world.