Chaplet of the Divine Mercy

The Chaplet of Divine Mercy is a unique prayer because it was given by Christ Himself. Sister Faustina heard it first in the interior of her soul and prayed using its words when in a vision she saw an angel, who came to punish the earth for sins (Diary 474-475). The second day, the Lord Jesus carefully showed her how to recite this prayer, and explained how great is its importance (Diary 476). In the subsequent revelations Jesus gave promises which He linked with reciting the prayer in trust.

First, Sister Faustina herself recited the Chaplet in different situations: beside the dying, asking for rain or to silence a storm. In 1937, Father Sopoćko arranged to obtain the imprimatur for the Chaplet and to get it published in Kraków, both on the images of Merciful Jesus and in the booklet entitled Chrystus, Król Miłosierdzia (Christ, King of Mercy). Since World War II the text of the Chaplet has spread far and wide. The Chaplet has been translated into other languages and published in many countries on pictures, in brochures, and in prayer books. In particular, Marian priests from the USA rendered enormous services here. They published materials about the Divine Mercy in many languages and worked towards getting such publications circulating in other countries.

The prayer book entitled Miłosierdzie Boże, ufamy Tobie (Divine Mercy, We trust in You) played a great role in promoting devotion to the Divine Mercy in the form given by Sister Faustina, including the Chaplet of Divine Mercy. It was prepared immediately after World War II, by Father Józef Andrasz SJ (Kraków spiritual guide to Sister Faustina). The book was first published by Jesuits in Kraków and the English version was published by Marians in the USA, who popularized it also in Canada, Australia, New Zealand, Asia and Africa. A Spanish translation of this small book was also published and, with the imprimatur of the local bishops, circulated in huge numbers in Latin American countries, especially in El Salvador, Colombia, Ecuador, Chile, Mexico, Argentina, Uruguay, Peru and Guatemala. It was distributed in Portuguese in Brazil; and in Europe the book was also translated and published in German, Italian, Spanish and Portuguese. 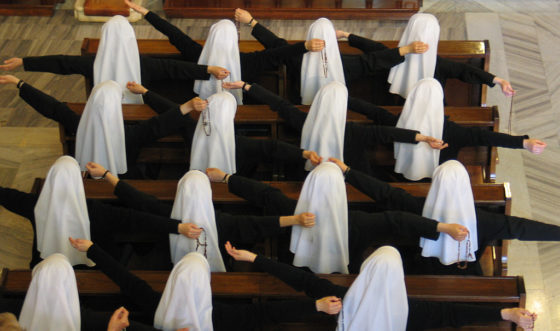 A set of prayers called ‘the Chaplet of Divine Mercy’ was already known in the nineteenth century. It was also recited by the sisters in the Congregation of Our Lady of Mercy in Kraków during the evening prayers. The Chaplet began with the prayer: “Our Father”, “Hail Mary” and then, on the large beads: “Lord Jesus Christ, for whom nothing is impossible except for You to refuse to take pity on those who beg for Your mercy – have mercy on us”, while the prayer for each decade of small beads was: “O my Jesus, have mercy!”, and at the end of the ten beads one recited: “Glory be to the Father”. At the end of the whole Chaplet, recited on the rosary beads, once again one repeated: “Our Father”, “Hail Mary” and “I believe in God”.

The Chaplet of Divine Mercy given to her by Jesus in the revelations of 13th and 14th September 1935 in Vilnius, was at first recited by Sister Faustina on her own. She writes about it many times in her Diary, and in her letters to Father M. Sopoćko she says: “When I told Mother General that the Lord wanted the Congregation to say the chaplet in order to propitiate God’s anger, Mother told me that at present she could not introduce new prayers that had not yet been approved… [by the Church] ‘But give me the chaplet, Sister, [she said;] perhaps it can be said during an adoration. We shall see. It would be good if Father Sopoćko could publish a pamphlet with the chaplet; then it would be better and easier to recite it in the Congregation’, (Diary 752).”

Before too long, Sister Faustina’s confessor, Father Michał Sopoćko had arranged the imprimatur for the Chaplet and other prayers to the Divine Mercy (novena, litany), taken from her Diary. He saw to it that they were published and printed in Kraków in the brochure entitled: Chrystus, Król Miłosierdzia (Christ, King of Mercy), and, too, he issued a separate picture with the Chaplet of Divine Mercy. Irena Krzyżanowska, Mother Superior of the Kraków convent, bought a lot of these books, to promote the Divine Mercy prayers. They were given to the sisters of the Congregation of Our Lady of Mercy; to priest friends leaving for a retreat or mission; even to people coming to the convent gate (cf. Diary 1519). Sister Faustina wrote in a letter to Father Sopoćko: “Mother Irena distributes the images and pamphlets. We spoke of giving them away even at the convent gate.”

After the death of Sister Faustina the proclaiming of the Chaplet of Divine Mercy accelerated, during the Second World War ,that is. Not only was the prayer then recited by the St. Faustina’s fellow sisters of the Congregation of Our Lady of Mercy and those they cared for, but the sisters popularized the prayer by handing out images with the Chaplet to people coming to the convent gate or by including the Chaplet in parcels to prisons and concentration camps. After Father M. Sopoćko ran out of the Kraków edition of prayers to the Divine Mercy, he arranged for them to be published in Vilnius. Times were hard, people were therefore turning to God and pleading for His mercy, more often than not in the words of the Chaplet; they were therefore very willing to accept the printed images and prayer.

Even during the Second World War, the text of the Chaplet of Divine Mercy was published in large editions by the Felician Sisters and Marian Fathers in the USA in Polish and English, and in Mexico in Spanish. When no image and Chaplet was obtainable, people either rewrote the prayer by hand, or learnt it by heart from those who knew it. A startling testimony was given by Father Franciszek Cegiełka, who wrote the text of this prayer in the concentration camp at Dachau on a piece of a German newspaper. He wrote in his testimony that while lying on his bunk in a high fever, Father Ogrodowski, a parish priest from Krotoszyn came to him and said “Father, you will certainly get better, if you spread the Chaplet.” “I asked Father Ogrodowski, where he got this Chaplet from?” – writes Father Cegiełka in his memoirs – “Well, from newcomers, new arrivals to the camp (…). With Father Dominik Sierszulski, who was then in the sick room next to me, we began to recite the Chaplet in bed from a strip of newsprint paper. (…) The Chaplet of Divine Mercy, very famous especially among Polish priests at Dachau, became a shield of strength and hope for me and for practically all Polish prisoners.”

After the war, the text of the Chaplet of Divine Mercy rapidly spread in very many languages, translated not only into the basic languages of the world, but also into very exotic or tribal ones. The Chaplet of Divine Mercy is recited not only in churches and chapels, in religious families and different communities, but also in many countries by means of Catholic media. Therefore today it is the most famous prayer of Divine Mercy, through which people implore many supernatural graces and temporal blessings.

In Poland, for reciting the Chaplet of Divine Mercy before the Blessed Sacrament, one can obtain a plenary indulgence under the usual conditions.