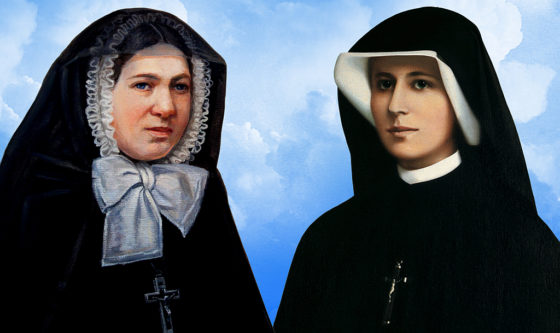 In the interwar period of the twentieth century (1918-1939) the young girls (referred by superintendents, courts and individuals) went on increasing in number and this led to the gradual organization of the school system. In this way, “Houses of Mercy”, originally intended for work and prayer, turned into closed educational institutions with the curriculum of primary and secondary vocational schools.

During the communist era (especially up until 1962) the institutions run by the Congregation were nationalized, and some were converted into “Caritas” facilities, in which the sisters took care of sick women, and children with impaired mental and psycho-motor abilities.

It was to this Congregation that the Lord called Sister Faustina Kowalska, through whom He gave the world the prophetic message of His merciful love for every person, urging her to proclaim this biblical truth of faith. On 25 August 1995 the Congregation acknowledged her as its spiritual co-founder. Today, the sisters carry on St. Faustina’s charismatic mission, by proclaiming the mystery of God’s mercy through the witness of their lives, lived in a spirit of trust in God; also of mercy towards neighbours, shown through works of mercy, and through mercy in word and prayer. The sisters run the following institutions: Youth Educational Centre for Girls; homes for single mothers; youth therapeutic and community centres; kindergartens; orphanages; residential care homes for children and adults; and retreat houses. The sisters also preach the message of The Divine Mercy in shrines, parishes and prisons; they form the Apostles of The Divine Mercy in the international “Faustinum” Association; they teach religious education in schools; they run the “Misericordia” Publishing House; they edit the “Orędzie Miłosierdzia” (Message of Mercy) quarterly; and they work in conjunction with the media. In all these works they try to show forth the Divine and human Mercy, as found in the Gospel.