Every Week in Another Country 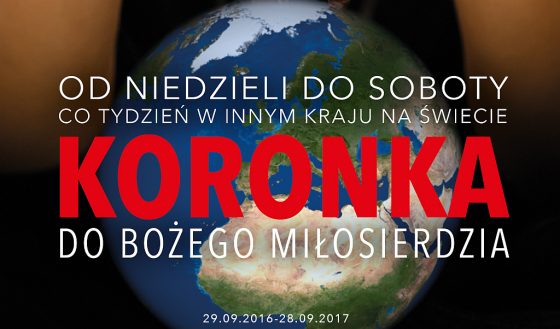 The community of apostles of Divine Mercy „Iskra” from Lodz, which has organized the „Chaplet of Divine Mercy in the streets of the world” campaign for several years, would like to invite everyone to say this extraordinary prayer throughout the days of a week in different countries. Throughout the year, the prayer will be taken in to various countries that previously applied to participate. Residents of a given country can repeatedly participate in this prayer activity. The campaign will launch on September 28 at3.00 pm with communal „Chaplet of Divine Mercy in the streets of the world”. From the following day, ie. September 29, the prayerful initiative wil be taken over by people from a previously designated country (or countries), who will be praying for their country and the world. You can pray in churches, in your homes, at work, or on the way to work. The first country to have applied is the United States, that will take over the daily prayer from 29 September to 8 October. The campaign will conclude on September 28, 2017, with another „Chaplet in the streets of the world.”

Patronage of honor over this prayer campaign was accepted by Archbishop Marek Jędraszewski, the Metropolitan Bishop of Lodz. Applications and more information can be found at www.iskra.info.pl