The village of Głogowiec is situated near Łęczyca, in the parish of Świnice Warckie, which lies on the border between the regions of Greater Poland and Mazovia. It was there that Marianna and Stanisław Kowalski bought a few acres of farmland from the Olejniczak family and, in 1900, built a modest, one-storey house and farm buildings of limestone, a style characteristic of this area. The house consisted of only one room, hall and kitchen, which was also the father’s carpentry workshop in winter. This house was small, and cramped. Still, it was a place that belonged to the family and it was there that ten children were born, including the Prophet of our times who revealed the message of Mercy to the world. 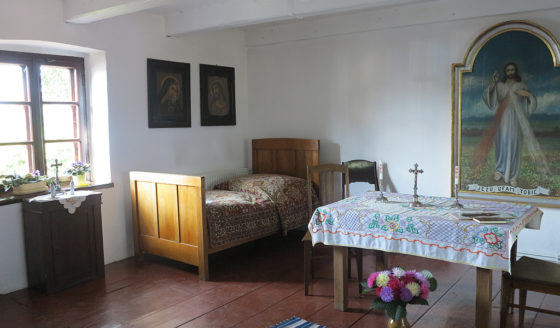 The Kowalskis supported themselves on a small farm and on the father’s carpentry skills. Although at home they lived very modestly and there was not enough money for many things, still there was enough to buy what was necessary for their spiritual life: A little altar with the Passion scene and faience statuettes of the Heart of Jesus and Mary had a prominent place in the room. Holy pictures hung on the walls and there was also a small collection of religious books. God was most important there, and this was expressed not only by such adornments in the house but, even more by the family’s everyday life: by prayer, work and the testimony of the parents’ lives. This was the atmosphere in which Helenka Kowalska grew up. At home she learnt not only to work but also and possibly above all else, to have faith, to love God and to love one’s neighbour.

Today Saint Sister Faustina’s family house belongs to the parish. It has been converted into a museum in which there are things illustrating the atmosphere of the times and the life of the Kowalski family. The farm buildings and the area surrounding the house have been adapted for pilgrims’ needs.