…for us and the whole world 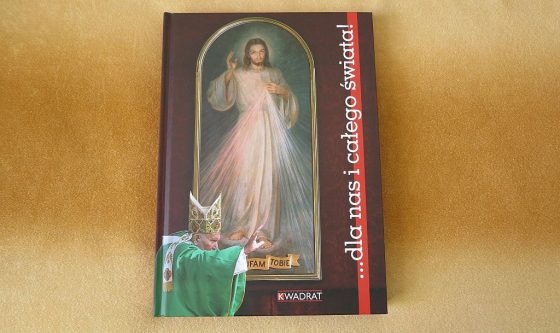 This is the title the album published by the Kwadrat book company dedicated to Adolf Hyła, known as the Painter of Mercy, and John Paul II, the Pope of Mercy. The artist was the author of the most famous image of Merciful Jesus of the Shrine of Divine Mercy in Krakow-Łagiewniki, and hundreds of other paintings made for many churches in Poland and worldwide. Saint John Paul II has revealed the message of Mercy as recorded in the Diary of St. Faustina to the Church and the world for the third millennium, and he entrusted the world to Divine Mercy. In the album, among others, you will find homilies of St. John Paul II and his successors delivered in the Łagiewniki Shrine, sermons and writings by priests of the Archdiocese of Krakow and Sisters of Our Lady of Mercy from the Łagiewniki convent, in addition to accounts about the life and work of Adolf Hyła. This is accompanied by many unique photos from the history of the Divine Mercy Image veneration from its beginning until modern times, on top of St. John Paul II and Adolf Hyła. The book is available from the Misericordia stationary store at the Łagiewniki Shrine and its online shop at www.misericordia.faustyna.pl.

Testimonies
I failed an exam in nursing school , i was giving an option to withdraw and go back to my country. I was lucky that it was during the time of divine mercy novena in preparation to Mercy Sunday, i joined in the novena. God helped me with someone who represented me in the school panel as i needed to state (...)
Npo, 2022-05-21
The Divine Mercy has brought me closer to God and his sufferings. I have had so many miracles in the last two years. I'm so peaceful knowing he is with me.
Claudia Scott, 2022-03-12
Once there was a terrible storm in the night when I was 12 years old. It scared me very much and to me it sounded as if the house would blow away at any moment. The thunder shook my bed and pictures on the wall.
So I took my beads and started praying the Divine Mercy chaplet. As I prayed, I could (...)
Addilyn, 2022-01-16
Read all testimonies   Add your testimony
‹ › ×
‹ › ×