The following priests supported Sister Faustina in discerning and fulfilling the prophetic mission of Mercy: in Vilnius the Blessed Rev. Michael Sopoćko was her confessor and spiritual director, whereas in Cracow it was Father Joseph Andrasz, SJ. 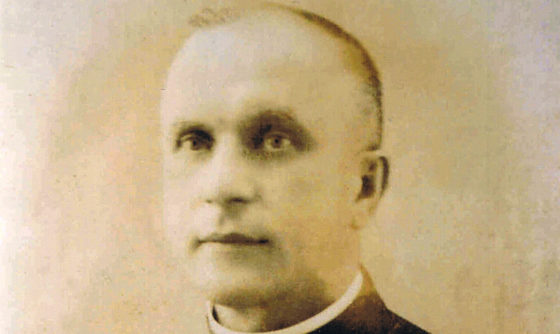 In June 1933, Rev. Michael Sopoćko met Sister Faustina Kowalska for the first time. It was in Vilnius, where he was the regular confessor of the Congregation of the Sisters of Our Lady of Mercy. At the very beginning she told me that she knew me because of a vision. She also told me that I was to be her spiritual director, who was to fulfil some of God’s plans which were to be conveyed by her. – he recalled years later. Rev. Sopoćko was Sister Faustina’s confessor and spiritual director till 21 March 1936, that is, till she left Vilnius. Later he corresponded with her a lot and, in this way, he gave her advice and directions for her spiritual life and the fulfilment of the mission, while when he was in Cracow he visited her in the convent or in the hospital in Prądnik. At his command, Sister Faustina started to write “the Diary”. He was the person who took care of painting the first image of the Merciful Jesus in Vilnius in 1934 and of the public veneration, which took place during the celebrations of the Jubilee Year of the Redemption on 26-28 April 1935 in Ostra Brama (the “Dawn Gate”). Still before World War II he made efforts to get the Church authorities to institute the Feast of Divine Mercy. He wrote a number of works on the truth of the Divine Mercy. Till the end of his life he strove for the institution of the feast and approval of the Divine Mercy worship. 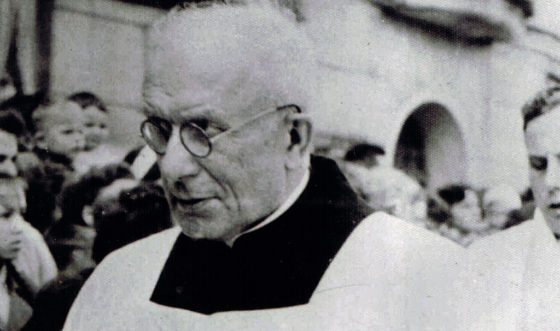 He was born in Juszewszczyzna, in Oszmiański district, on 1st November 1888. In 1910 he entered the Seminary in Vilnius. In 1914 he was ordained and for four years he worked as a curate in Taboryszki. In 1919-1924 he was a chaplain in the army in Warsaw and, at the same time, he did specialist studies at the University of Warsaw’s Faculty of Theology and at the Institute of Education. In 1924 he was moved to Vilnius, where, till 1932, he served as a chaplain in the army. Since 1928 he was employed as an assistant professor in pastoral theology at the Faculty of Theology of Stefan Batory University. In 1927-1932 he served as a spiritual director in the Vilnius Seminary. In 1947 he came to Białystok and from that time till 1962 he gave lectures in the Seminary. It is astonishing how diverse his ministry was: he was a parish priest, a religious education teacher, he organized educational courses, served as a teacher, a lecturer in the University and the Seminary, a spiritual director, a confessor of seminarians, priests, and nuns. He was also a chaplain in the army, an activist who promoted sobriety and a builder of churches.

He died in Białystok on 15 February 1975. In 1987 the diocesan process towards the beatification of Rev. Sopoćko was inaugurated and in 1993 the acts of the case were handed over to the Congregation for the Causes of Saints in Rome. In 2004 Holy Father John Paul II promulgated a decree on the heroic virtues of the Servant of God and then a decree regarding a miracle attributed to his intercession. He was beatified in Białystok on 28 September 2008 and his relics repose in the Divine Mercy church in Białystok, which has been raised to the rank of a diocesan sanctuary. 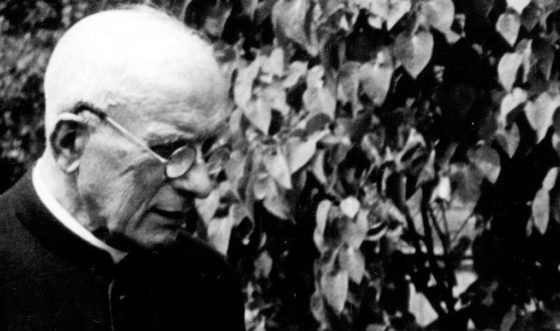 Saints find each other on Earth, recognize, support one nother and learn from each other. There are numerous examples of holy pairs: Francis of Assisi and Clare, Francis de Sales and Jane de Chantal, Albert Chmielowski and Sr. Bernardyna Maria Jabłońska. Saint Sister Faustina and her confessor, the Blessed Rev. Michael Sopoćko were also such a pair. It was in his person that, by God’s providence, Sister Faustina found this visible help on earth, thanks to which she was to carry out God’s will (Diary 53). However, through her pursuit of sanctity and the mission entrusted to her by Jesus she also influenced Rev. Michael’s spiritual life and apostolate.

“The Diary” depicts Sister Faustina as a person who, on the one hand, suffers, undergoes trials, and doubts whether or not what she experiences comes from God and, on the other hand, who receives consolations, experiences peace, closeness and love of God. She fulfils her duties, works, and prays faithfully, enduring her illness with patience. Heroically, she makes acts of reparation for other people’s sins. Her strength lay in a trusting and sincere faith. She was brought up in a simple but religious and upright family, where goodness was clearly recognized and explicitly related to God, who was its source as well as the source of love. It was this attitude that opened her up to God, to His inspirations and motivated her to be faithful to her vocation, which frequently cost her a lot in her daily life. This attitude also spurred her on to come to terms with her sufferings, which she offered to God for other people. Undoubtedly, her strength also lay in living the religious life ardently and genuinely, in observing the rule, in prayer and sacramental life.

Did the revelations, inner experiences shape her sanctity? “She had a hard time with them.” They were a source of hesitation and various doubts. Many a time she asked herself the questions: Is this true? Is this possible? And then she needed someone who would listen to her, understand her, who, sincerely and honestly, would tell her whether or not what she experienced was true and came from God. She needed someone who was competent, had knowledge, openness to the spirit of God and who was wanted to offer guidance regarding her experiences.

Rev. Sopoćko was the one turned up in this situation. Until he met Sister Faustina his way of life was similar to hers. At home and thanks to the environment in which he grew up and prepared himself for the priesthood, he received everything that was good for a way that was really humane and Christian, a way of vocation to priesthood: he received the gifts of trust, openness and sensitivity to God, readiness to make efforts, dedication, and the desire to give himself to serve God.  He also lived honestly, meeting the requirements of the state of priesthood.

When he met Sister Faustina he was given a new task: both of them faced the same problem, the same challenge – to proclaim the mystery of Mercy. They were open to God’s voice, to His inspirations, obedient and faithful to the entrusted mission. Their spiritual lives were sufficiently developed; therefore they could help each other. Actually, it was God who arranged everything. Indeed, it was His work. However, at the beginning they had to overcome their natural reluctance, and come to know and test each other. Thanks to “the Diary” we know that Sister Faustina did not tell her confessor everything right away, although God had showed her that he was to be the confessor she had prayed for. Jesus Himself had to reprimand her for that (Cf. Diary 263, 269, 144). Similarly, Rev. Sopoćko wanted to cease being the confessor in the convent of the Sisters of Our Lady of Mercy and he put Sister Faustina to a test. Finally, however, he rose to the challenge.

How did Rev. Sopoćko help Sister Faustina? As a priest, an appointed confessor, he was to instruct the penitent and he was responsible for her and the work of the Divine Mercy, which was revealed to him. Jesus Himself ordered Sister Faustina to obey the confessor (Diary 331, 979, 1308, 1644). Obedience prevented her from failing to fulfil God’s will and helped her to develop spiritually. Rev. Sopoćko did not have to encourage her to be faithful to God, to strive to develop her spiritual life since she desired that wholeheartedly. The confessor instructed her on the road to perfection. However, she herself cared about the love of God so much that, as if, naturally she reached the degrees of perfection one after another; maybe even the way she was already living anticipated what she was to learn later on. Still, it must be acknowledged that it was he who led Sister Faustina along the path of sanctity, which she wrote in “the Diary” herself (Cf. Diary 269-270, 331, 444, 144, 145, 937), or perhaps even more in letters to him. The very fact that she had a confessor who understood and supported her, even if he did not grasp everything fully at a particular moment, was of great help to Sister Faustina. He explained, discerned, confirmed whether or not her experiences, visions, revelations were real and even if there were doubts about it, he must have assured her that it was highly desirable to proclaim the truth of the Divine Mercy, venerate it and have a special feast. He himself helped Sister Faustina to meet Jesus’ demands and continued her apostolic mission after her death (Diary 53, 436-437).

How did the saint-penitent help Rev. Sopoćko? As has already been mentioned, he always took care of his spiritual life, development and growth. Like Sister Faustina, he was open to God’s calls, tried to fulfil His will and faithfully serve Him as a priest. Because he met her, he was called to do something more – to tasks which priests are not faced with every day: to the apostolate of the Divine Mercy, to make efforts to have the feast instituted and to spread the worship, whereas the very insight into the Saint’s soul became a special challenge to his personal desire to attain sanctity. First of all, her prayer and sufferings offered for his intentions were an invaluable help (Diary 330, 596, 838, 851, 868, 988). He learnt from her to trust God. Sister Faustina also supported him in that when she was departing from this world. After the last meeting and conversation with her Rev. Michael wrote: I felt great pain in my soul and I was embittered because I had to say goodbye to this unusual creature and because I felt so abandoned by everybody. However, I understood that, first of all, I had to trust the Divine Mercy especially. (…) That’s why I had to stop being small-minded and I was to trust, trust and once again trust Him. Certainly, her intercession with God and the fact that she assured him that she would help him in heaven was a great support to Rev. Sopoćko’s apostolic efforts:  At my request, she said goodbye, promising prayer here on earth and after death, and wished me all God’s graces. Inspired by Sister Faustina’s holy life and revelations, he became a great apostle of the Divine Mercy. Since he was her spiritual director who witnessed her intimate dialogue with God and the works which God did in her, he touched the mystery of God more deeply. His efforts to develop himself and to be faithful to the priestly mission, marked by the charism of the Divine Mercy apostolate, animated and strengthened by the fact that he met this unusual penitent, resulted in his personal sanctity, which we witness today because he has been beatified. Indeed, saints pair up.