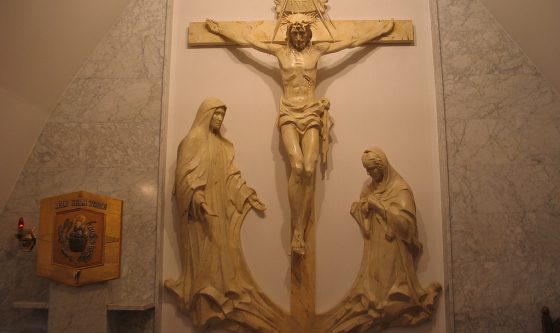 The hour of the Lord Jesus’ death, 3pm, is a privileged time as regards the devotion to the Divine Mercy. At that hour, in spirit we stand beneath Christ’s cross in order to entreat for mercy for us and the whole world for the sake of the merits of His passion. The Lord Jesus said to Sister Faustina: “At three o’clock, beg for My mercy, especially for sinners, and immerse yourself, even for a short moment, in [contemplation on] My Passion, particularly when I was left forsaken at the moment of death. That is the hour of great mercy for the whole world” (Diary 1320). Immediately, it needs to be explained that what is meant here is not sixty minutes but the moment of Jesus’ agony on the cross, therefore – the prayer at 3pm.

The Lord Jesus did not say what the exact wording of the prayer at 3pm should be, however, He said that we can make the Stations of the Cross, visit the Blessed Sacrament and if there is no time for it – if only for a brief moment – we can unite ourselves with Him, dying on the cross, wherever we happen to be at that time. The subject-matter of the prayer is the mystery of the Lord’s Passion. The prayer said at the Hour of Mercy should meet specific conditions, namely, it should be said at 3 p.m. (when the clock strikes the hour), it should be addressed to Jesus directly and in its entreaties the prayer should refer to the values and merits of His sorrowful passion.

The prayer at the Hour of Mercy when said regularly makes us start having a personal, direct contact with Jesus because it tells us to: meditate upon His Mercy revealed in the Passion, address to Him in a direct manner, like to a very close person, and, it tells us, for the sake of the merits of His Passion, to entreat Him for the graces necessary for us and the world. It is up to us whether at 3pm we want to practice the prayer at the Hour of Mercy or to say the Chaplet to the Divine Mercy. While telling others about the devotion to the Divine Mercy and while practicing it, this should be stated clearly and the Chaplet should not be confused with the Hour of Mercy. 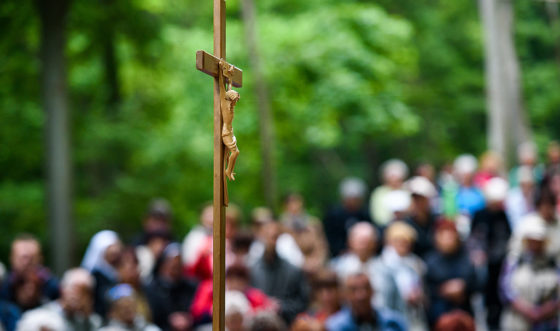 The Hour of Mercy – this is what the Lord Jesus Himself said about the hour of His death when in October, 1937, in Cracow, He was conveying another form of worship – a part of the devotion to the Divine Mercy – to Sister Faustina. A few months later, in February, 1938, He repeated the order – to worship the hour of His death. He also defined its aim, said how it should be observed and repeated the promise attached to it. He said to Sister Faustina: “My daughter, I remind you, every time you hear the clock strike three, immerse yourself completely in My mercy, praising and glorifying it; beg the omnipotence of My mercy on the whole world, and especially on poor sinners, for at that moment mercy was flung wide open for each and every soul. …At that hour grace came upon the whole world –  mercy superseded justice” (Diary 1572). At this hour the work of the redemption of man was carried out. By His Passion and obedience unto death Jesus made satisfaction for our sins to God, He opened the gates of heaven, which had been closed by Adam. On the cross „mercy triumphed over justice”, the mercy did not erase it but by fulfilling it, it went beyond it.

Therefore, at the moment of Jesus’ agony on the cross we are to ponder over the mystery of the Divine Mercy, which has revealed itself most fully precisely through the Passion and death of God’s Son Incarnate. The Lord Jesus asked: “Even for a short moment, in [contemplation on] My Passion, particularly when I was left forsaken at the moment of death” (Diary 1320). Meditation on the Lord’s Passion is to lead us to the adoration and glorification of Jesus’ Mercy and also – as He has wished – to entreaties for the Divine Mercy for the whole world, and especially for sinners who need it most.

Moreover, the Lord Jesus gave Sister Faustina concrete instructions as regards the manner the Hour of Mercy should be observed. He said: “At that hour try to make the Stations of the Cross, insofar as your duties permit it; and if you can’t, then at least go into the chapel for a while and worship My Heart, Which is full of mercy in the Blessed Sacrament; and if you can’t get to the chapel, then immerse yourself in prayer wherever you are, even for a little while” (Diary 1572). In order to practice the prayer at the Hour of Mercy it is not indispensible to go to church or have a lot of time. If we do not have it, a brief instant suffices – to stand, in spirit, at the foot of the cross on Golgotha and to unite ourselves with the dying Jesus. Apart from the Stations of the Cross, which are a known part of the Christian piety, the Lord Jesus did not provide us with any wording of the prayer. However, the analysis of His words (promises) shows that the prayer at the Hour of Mercy must meet certain conditions.

Firstly, it should be said at 3pm (not 3am), because it is to honour the moment of Jesus’ agony on the Cross. Secondly – it should be addressed to the Lord Jesus directly, therefore, not to God the Father, the Blessed Mother or Saint Faustina because the Lord Jesus said: “I shall not refuse anything that a soul may ask of Me…” (Diary 1320). However, we can beg for mercy together with Mary standing beneath the Cross and together with Saint Faustina. In our entreaties, we should refer to the values and merits of the Lord Jesus’ sorrowful Passion, therefore in the prayer we use the expression: „For the merits of Your sorrowful Passion, we ask You, Lord…”. However, we do not say: „Through the intercession of the Blessed Mother or Through the intercession of Saint Faustina”, because saying such a prayer we would refer to the values and merits of the Mother of God or saints but, as the Lord Jesus wants, we are to refer to the merits of His Passion. Intentions which we say during the Hour of Mercy (prayer of intercession) should be according with the will of God, which pertains to all prayers. The prayer itself should be trustful and it should also be combined with deeds of mercy towards neighbours, which is a condition of the true devotion to the Divine Mercy.

The Lord Jesus attached a promise to the prayer at the Hour of Mercy meeting the above-mentioned conditions, namely the promise of obtaining all possible graces as well as rewards in this world. He said to Sister Faustina: “I shall not refuse anything that a soul may ask of Me, for the sake of My Passion…” (Diary 1320) and some other time He added: “Whatever you ask for at that hour, for yourself and for others” (Diary 1572).