Hundreds of Thousands Young at the Shrine in Krakow-Łagiewniki 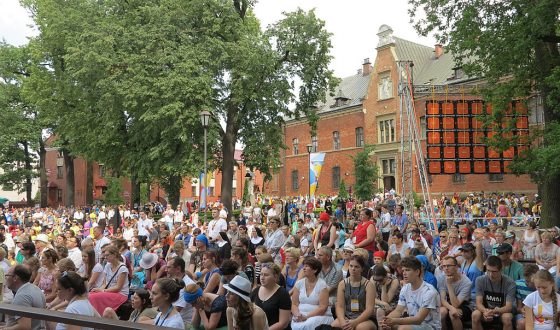 On the first day of the World Youth Day, July 26, the Łagiewniki Shrine of Divine Mercy was visited by over 200,000 young people. On the next day, the Shrine saw a true „siege”. Some of the young visitors participated in the Jubilee Pilgrimage of Mercy which passed from the Shrine of John Paul II to the Basilica of the Shrine of Divine Mercy (one hundred thousand), while others headed straight to the „heart” of the Łagiewniki Shrine, that is, the chapel with the miracle-famous image of Merciful Jesus and the tomb of St. Faustina. Undeterred by the long line, they patiently waited for their time to enter the chapel. The waiting time was filled with prayer, singing and listening to the message of Mercy, which has been spreading around the world from this particular place. Thousands of young people took part in the afternoon concert of worship in the courtyard of the convent, combined with prayer at the Hour of Mercy and recitation of the Chaplet of Divine Mercy, along with proclaiming the message of Mercy in Polish, English and Spanish. More than one hundred thousand Italians took part in the afternoon Mass, which was celebrated on the grasslands at the basilica. Then a huge crowd of German speakers took part in the solemn Vespers. On this day, the Łagiewniki Shrine was visited by the record number of pilgrims: 350-400,000. Among them, there were many thousands of first-time visitors, many came from all continents, even from tiny islands in the oceans, including the Cardinal of the islands of Tonga in the Pacific. Today, we are experiencing another day of pilgrimage to the holy site.