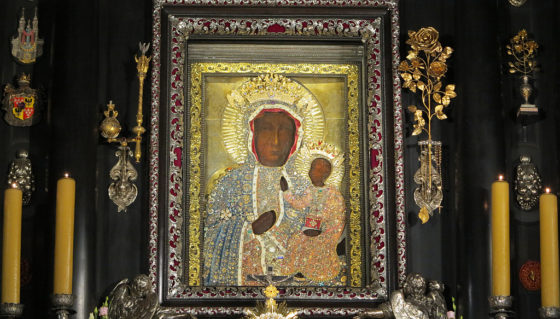 It must be admitted that Sacred Scripture contains no direct references to Mary as Mother of Mercy, Our Lady of Mercy, Mother of Divine Mercy, or the merciful Mother. There are, however, Biblical texts that perfectly describe these titles and the reality hidden behind them. A similar situation occurs with regard to Jesus as Incarnated Mercy. There is no such expression in the Bible; yet, there are plenty of passages which clearly speak of the incarnation of the second Person of the Trinity (John 1:14, Philippians 2:6n) and emphasize His mercy (healings, e.g. Mt 9:27n, resurrections, e.g. a boy of Nain, Luke 7:13n, or the Redemption of man). Therefore, calling Jesus the Incarnate Mercy is fully justified, since this term, used by Saint Faustina, contains the essence of the life and mission of Jesus. This involved the adoption of the human body, so that He could reveal to the world the life, word and deeds of the Father, Who is rich in mercy. Jesus is indeed “mercy itself”. He referred to himself directly in this way in the visions of Saint Faustina. He repeatedly said “I am Love and Mercy itself” (Diary 1074, 1273, 1486, 1739, 1775, 1780) and thus Sister Faustina spoke about him in this way (Diary 383, 950, 1264, 1552, 1574, 1751).

The same sort of situation occurs in the case of the titles of Mary as Mother of Mercy, Our Lady of Mercy or Mother of Divine Mercy, etc. Each of these titles reveals a specific reality associated with the life of Mary and her unusual mission as the Jesus’ Mother, who actively participates in the Redemption. In considering the mystery of mercy in relation to her, one has to take into account two fundamental dimensions. Firstly, Mary as Mother of Mercy Incarnate, endowed by God with the fullness of grace (Immaculate), who gave birth to the Son of God in human flesh (Bethlehem), and who participated in the manifestation of God’s mercy to the world until the fiat of Golgotha. Secondly, Mary as the merciful Mother of mankind, who performed mercy through acts of which the first and greatest is giving the Son of God to the world (the visit to Elizabeth), through words (the Magnificat), and through prayer (the wedding in Cana, or the prayer with the apostles in the Cenacle).

What, however, is the basis of calling Mary the Mother of Mercy? Are there biblical grounds for such a title of Mary, apart from the existential experience of believers?

Sacred Scripture clearly shows the mercy of Jesus (e.g. Luke 7:11-17, 18, 35-43) and calls him ‘mercy’ in 2 Corinthians 1:3. This passage will now be considered, for its understanding is crucial to the title of Mary as the Mother of Mercy: “Blessed be the God and Father of our Lord Jesus Christ, the merciful Father and the God who gives every possible encouragement” (2 Co 1:3) whereas the Polish translation states “the Father of mercy”.

Taking into account the original text (written in the Greek dialect Koine) of the passage, together with its grammar record, Semitic style and analysis of the context in which these words were written, one can easily conclude that the words ‘encouragement’ and ‘mercy’ refer to Jesus Christ. Con- sequently, if Mary is the Mother of Jesus and Jesus is Mercy, then Mary is the Mother of Mercy, mercy in the deepest understanding of the word, namely mercy which revealed most of its light in the Redemption of mankind from the bondage of sin and death. The truth of God’s mercy was most fully revealed in Jesus and through Jesus. He is, as St. Faustina says, Mercy Incarnate, and his mother is consequently Mother of Mercy.

The title of Mary as Mother of Mercy cannot be restricted to a purely literal one, or only to the biological, natural dimension. Mary, because she gave birth to Jesus – Mercy, is His Mother for natural reasons, or Mother of Mercy. But the title has a wider meaning. Calling Mary Mother of Mercy points to the reality of her experiencing the mystery of mercy associated with her Son. As the mother of Jesus, Mary becomes the most credible witness to the Son’s revelation of the mystery of God’s mercy. One may say that Mary is the first Missionary of Mercy, Mother of all who proclaim her Son – Mercy (cf. John 19:26). It manifests in the Marian hymn of praise in honour of Divine Mercy (cf. Magnificat and particularly Luke 1:50-54) in connection with the conception in her of the promised Messiah – Jesus. The name means ‘Yahweh saves’ and the salvation is the revelation and proof of God’s merciful love. Thus Mary can be said to be Mother of Mercy because she lives the mystery of God who is Mercy. She is thinking about Him, pondering His words and deeds in her heart (Luke 2:19). She not only carries Mercy Incarnate when going to her cousin Elizabeth (Luke 1:42n), but also gives it to the whole world.

Mary reaches the peak of this beauty and at the same time the difficulty of her maternity of mercy when she is standing at the Cross. She is Mother of Mercy not only because of blood ties, but also through empathy with her Son, who in his passion fully reveals the power of God’s merciful love. Mary precedes all who have ever since been involved in this work of revelation and realization of God’s mercy in the world. In some way Mary spiritually shares the fate of the Son and also becomes the most perfect disciple of Jesus in His “school of mercy.”

Mary becomes the mother of every man through the attitude of her heart’s total adherence to Mercy, which manifested with particular force on the Cross (John 19:27). Therefore this individual act of the adoption of humanity by Mary does not only result from the fact that, since Mary is the Mother of Jesus, and the Son is our brother (because He restored us to being God’s children), then Mary (logically speaking) is also our Mother. Well, her motherhood for us also lies in describing Mary as Mother of Mercy. Indeed, by the sacrifice of Her heart, Mary in the most complete way united Her suffering with the Passion of Christ and by an act of will (by not running away from the Cross) decided with the Son to implore the Father’s forgiveness for the world. Consequently, she shows solidarity with her Son – Mercy, and at the same time she is revealed before us as merciful Mother, ready to forgive the man who kills her most beloved Son – her only Child.

Calling Mary the merciful Mother has its deep biblical basis also in the Hail Mary, recorded in Luke 1:28: “He [the angel] went in and said to her, ‘Rejoice, you who enjoy God’s favour! The Lord is with you’.” The key words here are “who enjoy God’s favour”, or in the original language kecharitomene. It is worth noticing that the Archangel Gabriel does not call the Virgin of Nazareth by name, but says “who enjoy God’s favour” thus as though giving her a new name. This occurs in the context of the imminent Incarnation of God. The fiat of Mary determined Her motherhood full of mercy. Apart from the detailed exegetic analysis of the term, it is important to note that the concept of kecharitomene includes a reference to the word charis, commonly translated as ‘grace’. However, contemporary man tends to react to the word ‘grace’ rather in a negative way. Grace includes a risk of humiliation and the need to recognize one’s own powerlessness in a certain field of life or to confess one’s guilt and weakness. Nevertheless, the Greek word charis is far from such an understanding of the word ‘grace’. It means God’s desire to endow us with affection, love, and His willingness to thank man for his kindness shown to neighbours! This can indicate that God took a particular interest in someone and surrounded them with His care (Luke 2:40), took a liking to someone and bestowed a special blessing, or benevolence; freed from evil and from sin (John 1:17).

The person who has been endowed with charis, has a special ability to trust God completely and witness to His goodness (Acts 4:33). All the outpouring of God’s mercy somehow concentrated in Mary. As the Church teaches us, Mary was protected from sin, the fullness of grace concentrated in Her, in other words the merciful love of God. Mary by the gift of life of the mercy of God, by carrying in Herself all His graces, was especially gifted to share the goodness and love. She expresses it at the wedding at Cana (John 2:1-12), when she intercedes for a young couple and protects them from shame, or in the Upper Room, because with the apostles she asks for the gift of the Holy Spirit for the early Church. Owing to her trust and intercession, Jesus can deal with any problems, the miracle of transformation of water into wine takes place, and the Holy Spirit descends upon the Apostles. Mary is thus a loving Mother primarily by the will of God. Merciful means called to advocacy for mankind. Merciful also means full of trust in God.