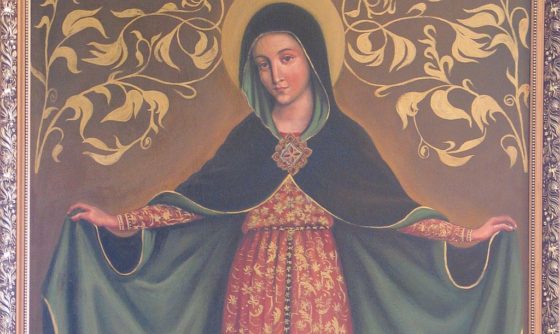 The iconography of Our Lady of Mercy varies according to the age, the part of Europe and the place where Mary’s mercy was or is being venerated. In the West, the image of Mater Misericordiae with a mantle of protection became very popular from the thirteenth century on. It protected representatives of the hierarchy, different cities, religious orders (especially Cistercian monasteries), the Franciscan brotherhood and other communities. Her images have appeared in churches, on banners, in monasteries, and on seals and woodcuts. This iconographic idea of Mater Misericordiae sur- vived in a simplified form until the eighteenth century.

In the East, the idea of Mater Misericordiae was known as Pokrov or Pokrova with a protective scarf or shawl, with which she held those fleeing under her protection. Mary held it in her hands or angels spread it over an area or community where she spread her protection. The iconography and liturgy of Pokrov Theotokos was related to a vision of St. Andrew Fool-for-Christ in the Blacherne church: Mary appeared to him among the saints and after a prayer before the altar, she spread the shroud out on her hands as a sign of protection for people. Her garment was preserved in this church as a priceless relic. Within this relic’s veneration grew an idea of the Mother of God’s protectiveness, which has survived to this day. With time, new strands were introduced into the veneration of Mater Miserticordiae in the West – a defence against the wrath of God, which also changed the iconography. Mary was presented without the mantle of protection, but as the one who breaks the arrows of God’s anger. In the beginning, some places affected by the wrath of God were shown in the background of her figure: later only the figure of Mary remained, breaking in her hands the arrows of God’s anger. In the seventeenth century, the Piarists promoted this type of iconographic image and sculpture depicting the mercy of Mary. It is known in Poland under the name of Our Lady of Grace (Gracious Mother of God), under which title she has been recognized since 1664 by the municipality of Warsaw as the patron of the city.

Since the seventeenth century, Our Lady of Mercy has also been venerated in the image of the Gate of Dawn (Ostrobramska). It shows Mary at the moment of Annunciation, accepting the Son of God, Mercy Incarnate, into her life – at the same time uttering her ‘fiat’ at the foot of the cross, which is indicated by the gesture of her hands crossed on her chest. The image became famous for its many graces and lively devotion to the mercy of Mary. It was therefore crowned in 1927 and the Chapel of the Gate of Dawn in Vilnius became the most famous Shrine of Our Lady of Mercy in this part of Europe, not only for Catholics. 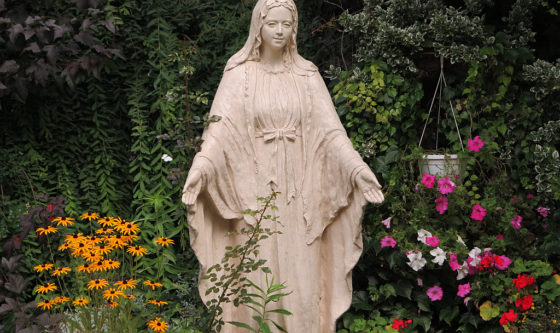 In the West, Mater Misericordiae images were predominant. They were associated with devotion to Mary the Protectress, defending each one who calls on her help. The sign of Mary’s mercy was the mantle under which all those looking for her protection took shelter: popes, cardinals, orders, convents, cities, and various communities, etc. In iconography, the mantle represents one of the oldest symbols of protection and power. It was introduced to the Mater Misericordiae images under the influence of legends of miracles which Mary did, while covering with the mantle of protection people, cities and nations … The first one of these legends dates back to the fifth century and tells of the miraculous rescue of a Jewish boy, who was a convert. His father threw the boy into a fiery furnace for betraying their religion. Mary protected him with her mantle and so he survived. Then other stories appeared about the rescue of Constantinople, which Mary protected with her mantle during the attack of Avars in 626. Still other legends described a miraculous saving of the city of Avignon; and in another case the monastery in Mont-St. Michel against the waves of the Atlantic. It is not known which of these legends had a decisive influence on the development of the idea of Mater Misericordiae and her iconography. Initially, the Mother of Mercy was presented with the infant Jesus in her arms, then without the Infant, but with the mantle of protection widely outstretched, sheltering all those who hoped in her mercy. The Franciscans have promoted this type of image since the thirteenth century (especially in their brotherhoods), and similarly the Cistercians, who still have in the seal of their order the image of the Mater Misericordiae protecting monks with her mantle.

In the sixteenth and seventeenth century Mater Misericordiae was venerated in various religious orders. She was venerated by Dominican friars, Dominican nuns, Carmelite friars, Carmelite nuns, Norbertine friars and Norbertine nuns, Franciscans, Cistercians … mainly in Italy, Germany and France. In Poland this type of iconography was rare (The Jasna Góra Monastery (Clarus Mons) and Lwów (Lviv)), because it was held back by a great feeling of piety and awe towards the Mother of God. This kind of piety did not allow for such intimacy, that is, for searching for protection under her mantle. At the end of the eighteenth century and in the nineteenth century, as a result of changes in the mentality of the era, and to a decrease in the role of religion, the idea of Mater Misericordiae began to dawn. The mantle as the symbol of mercy (protection) was abandoned; instead she was portrayed holding in her hands broken arrows of God’s wrath, and was given the title of Our Lady of Grace.

Our Lady of Grace 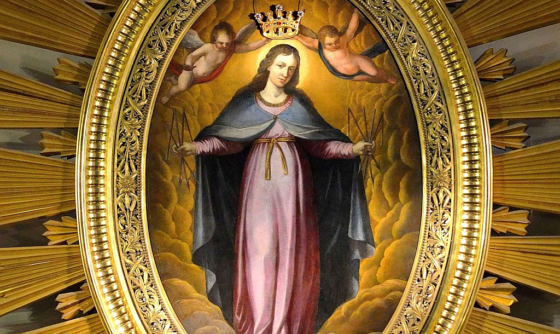 In the fourteenth century plagues raging in Western Europe contributed to the development of the devotion to Mater Misericordiae, and the theme of protection from the wrath of God was introduced into this devotion. For it was believed that plagues, famine and wars, in the face of which people felt helpless, were a manifestation of the wrath of God, and therefore people sought help in Mary. In the iconography this theme was expressed by three arrows (meaning three disasters: plague, famine and wars) which Mary broke in her hands; or she appears indicating the love of her heart with a pleading gesture and protecting those looking for her care with the mantle. Over time, iconographic works of Mater Misericordiae were simplified in their composition by discarding those details which were losing relevance: that is, the collective search for security under the mantle of Mary, and finally, the mantle itself. Only such details remained which were the very essence of the idea of Mater Misericordiae, that is the image of Mary and the arrows of divine wrath broken by her. Our Lady appeared in such a form to a devout woman in Italy during raging plague and demanded three-day penitential processions, after which the plague ceased. This iconographic type was spread especially by the Piarists. The Apostolic Nuncio presented the image of Mary breaking the arrows of God’s wrath for the church in Warsaw. This image became famous for miracles and was later crowned. Mary was venerated in this image as Our Lady of Grace for bubonic plague. In 1664 she was given the title of the Patroness of Warsaw by the Warsaw Municipal Council.

Mother of Mercy of the Gate of Dawn 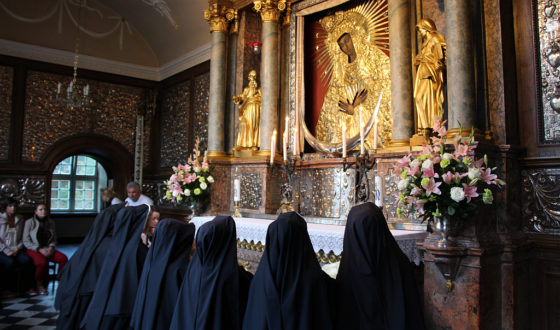 In Vilnius, Lithuania, the image of Mary has been venerated at the Gate of Dawn since the beginning of the seventeenth century. Mary is presented without the Infant but with folded hands in a gesture of ‘fiat’ spoken at the moment of Annunciation, or at the foot of the cross. In this image by an unknown artist, Mary has been venerated as the Mother of Mercy from the very start. There was an inscription in Polish at the gate: Mother of Mercy, we have recourse to your protection (Matko Miłosierdzia, pod Twoją obronę uciekamy się). After the failure of the January Uprising (1863-1864), the Russian authorities ordered the inscription to be given in Latin. The original version was restored after Poland regained independence in 1918, but in 1946 the same text in Latin was inscribed again in the Gate of Dawn. Mary’s head is surrounded with an unusual halo of sun rays, between which the stars are visible. There is a large crescent moon (a votive offering) in the bottom of the image, which completes the entire composition. These attributes recall the words of the Revelation of St John: “A great sign appeared in the sky, a woman clothed with the sun, with the moon under her feet, and on her head a crown of twelve stars.” (Rev 12:1). So Our Lady of the Gate of Dawn is not only the Mother of the Son of God in the mystery of the Incarnation, Mother participating in the work of redemption (‘fiat’ at the foot of the cross), but also the Woman glorified, clothed with the sun and crowned with stars, who constantly intercedes for the pilgrim Church on earth, which is exposed to various dangers. Her images can be found in many churches, monasteries and homes in Lithuania and Poland.