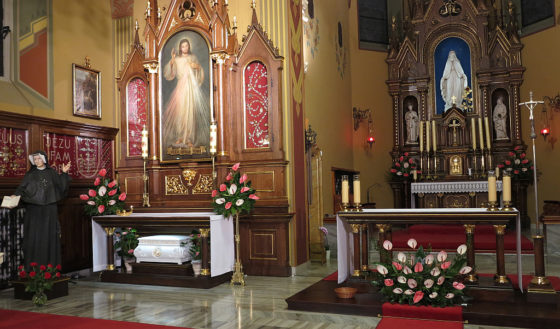 Our Lady presented in the image of Mary with outstretched arms is the Patroness of the Congregation – reads Article 11 in the constitutions of the congregation. The outstretched hands of Mary are full of all graces and gifts with which she desires to endow people, and the first and greatest of these is the Son of God – Mercy Incarnate. The sisters adopted the statue of Our Lady of Mercy from France (Laval), the source of their patterns of religious life and apostolic work. The statue of Mary has been venerated at the main altar of the chapel in the Convent of Our Lady of Mercy in Laval, where Mary is presented without the Infant and with hands outstretched towards the people. She had been venerated there long before the revelation of the miraculous medal, on which Mary is depicted in a similar manner. The founder of the congregation was Mother Teresa Ewa, Countess Potocki of the Sułkowski princes; she not only brought to Poland copies of the French Constitutions and the principles of running the apostolic work with girls and women in need of a deep moral renewal, but also tried to transfer as faithfully as possible the spirit and customs of the French congregation. Therefore, she adopted figures of Mary, Our Lady, the way she was revered in France. These adorn the chapels and convents of the congregation today. 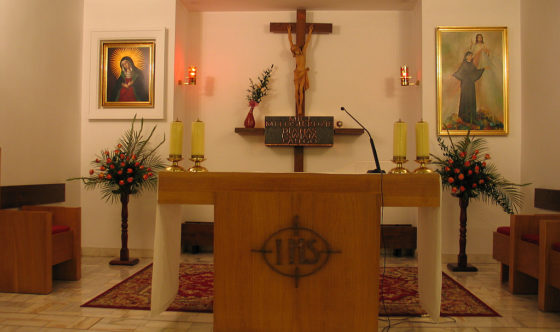 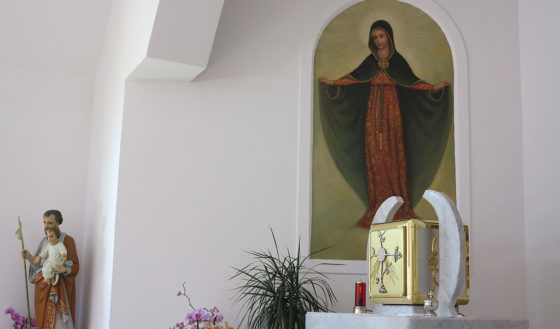 In 1937, to celebrate the election of Our Lady of Mercy as heavenly Superior General of the congregation, commemorative pictures were printed showing Mary with her mantle of care covering on one side the sisters and on the other the women and girls in their care. A prayer was printed on the reverse side, and one could obtain a partial indulgence by saying it. The ceremony of the election of Mary was celebrated in individual convents, on 15 August 1937.  „As we were making the act in honour of Our Lady – on that occasion St. Faustina wrote – I saw the Blessed Virgin, Who said to me, «Oh, how your tribute of love has pleased Me». And then She put all the sisters of our Congregation under Her cloak. She put Her right arm around Mother General Michaela, and Her left arm around me, and all the sisters were at Her feet, under the cover of Her cloak” (Diary 1244). These events made possible the reference to the mercy of Mary as shown in this kind of iconography widespread in many countries of Western Europe since the thirteenth century. In recent years, in convents of the congregation (Kraków and the chapel in Zakopane), statues and pictures have appeared of Mater Misericordiae with the outstretched mantle of care.