In the School of St. Faustina and John Paul II 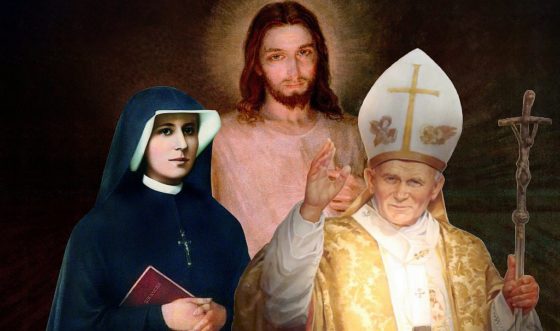 Church history has known many models of Christian mercy. In our time, a new model emerged, which was contributed to the life of the Church by St. Sister Faustina and Pope John Paul II. Theologians define this model as a personalistic one, since it primarily focuses on human dignity, and not on man’s needs or on the very act of mercy, as is the case in other earlier models. Pope John Paul II used his works to present it in theological terms, chiefly in the encyclical Dives in Misericordia, and, in her work entitled Diary, St. Sister Faustina presented it in a descriptive way, using the language of a mystic and a practitioner. The Diary reveals not only her understanding of mercy, but also the way in which an attitude of mercy took shape in her life and ways of practising active love towards one’s neighbour.

I the practice of Christian mercy the understanding of the concept itself is extremely important, because the quality of the practice of goodness to another person depends on it. Today there are many false notions of mercy, and according to some of them mercy is often equated with leniency, pity, or cancelling out justice, and therefore St. Sister Faustina’s concept of mercy, proper and thorough, is worth noting. For her, human mercy is very closely related to the mercy of God, the source, model and motive for human mercy. Such mercy assumes fulfilment of the requirements of justice, which is the basic measure of love, and leads to specific action. Sister Faustina wrote that “Mercy is the flower of love” (Diary 651), “God is love, and mercy is His deed”, so mercy is a deed of Love (cf. Diary 651).

In the life and writings of St. Sister Faustina, practising mercy toward one’s neighbours must first and foremost take into account the dignity of the person in need, and then man’s bodily and spiritual needs. The same dignity is shared by the person in need and by the welldoer, such dignity being an intrinsic value of every human being, already given to man by God by virtue of his creation and redemption. What makes St. Sister Faustina’s personalistic school of mercy distinctive from other models that have emerged in the history of the Church, and also makes it an essential foundation for the practice of mercy, is precisely this acknowledgement of the dignity of the one who is in need – a dignity given to him by God, and emphasized by Christ.

This understanding of mercy, whose source, model and motive is in God, and which focuses on human dignity – constitutes, according to Sister Faustina, a way of life. It does not consist only in sporadic or occasional acts of mercy towards the needy, but implies that a Christian’s attitude towards all other people should be completely guided by merciful love. Sister Faustina prayed: “I desire to be transformed completely into Your mercy and be a living reflection of You, O Lord; may God’s greatest attribute, His unfathomed mercy, pass through my heart and soul onto my neighbours” (Diary 163).