In the Writings of St. Faustina 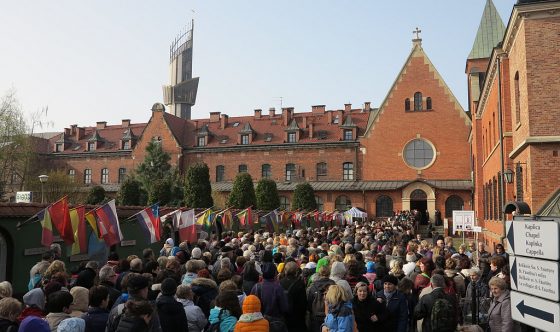 The charism of Saint Faustina yielded not only the new school of spirituality but also the Apostolic Movement of the Divine Mercy. It undertakes in different manners her task of proclaiming to the world the message of Mercy through the testimony of life, deeds, words and prayer.

The idea of this Movement was revealed to Sister Faustina in Vilnius in 1935 when the Lord Jesus ordered her to set up a new congregation “to preach Divine mercy to the world and to pray for Divine mercy for the world” (Diary 436) Initially she claimed that she had to leave her congregation and set up a contemplative convent for which she wrote even a summary of convent rule. Gradually she recognized that the idea went far beyond one convent or congregation. In the beginning of 1936, she wrote in a letter to her spiritual director Rev. Michał Sopoćko, „I can see clearly that there is going to be not only both a female and male congregation, but a great association of lay people which everybody can be a member of and thereby with his deeds remind others about God’s mercy and exercise mercy towards others. Please do not think that these thoughts are [mere] madness, for they are the sincere truth, which will shortly be carried out in deed, even if I would have no one in favour of this work; still, I am not discouraged by anything, for it is enough for me to know that this is the will of God.” However she still claimed that her role in this work would be setting up a contemplative congregation. The desire of fulfilling of this task was the basis for passive nights (mind and will) in her life, after which she achieved full union with God: mystical betrothal and mystical marriage. Finally in her mystical experience she clearly recognized that the task, albeit one, would have three aspects. The first was that of cloistered religious orders, “is for those souls who will be isolated off from the world, burn as a sacrifice before God’s throne, and beg for mercy upon the whole world… And pray for blessings on priests, and by their prayers they will be preparing the world for Jesus’ final coming” (Diary 1155). The second aspect was that the religious congregations were to combine prayer with acts of mercy “and in a world full of egoism they will endeavour to kindle the love and mercy of Jesus” (Diary 1156). The third aspect consisted in the fact that everyone in the world can belong to this group through prayer and deeds of mercy without any obligation to take vows. “A member of this colour – Sister Faustina wrote – should do at least one act of mercy a day, though they can do more, since anyone, every the poorest, can do an act of mercy, it’s easy” (Diary 1158).