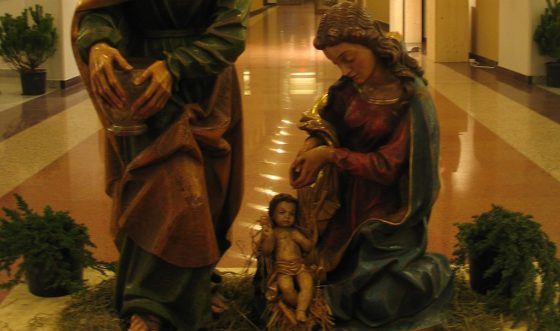 Within the Church, Our Lady of Mercy has been venerated under this title for a long time; however, theological literature on this subject is scarce. Our Lady of Mercy is first and foremost the One who gave the Son of God, Mercy Incarnate, to the world and continuously does so, leading all believers to Him. Today’s most complete justification for this title of Mary is given by Pope John Paul II in his encyclical Dives in Misericordia, where he writes that Mary is first of all the One who obtained God’s mercy in an exceptional way, when she was preserved from original sin and endowed with the fullness of grace, to become the Mother of the Son of God. She consented at the time of the Annunciation, and in Bethlehem she gave birth to the Son of God in human flesh and, throughout her life, participated in His revelation of the mystery of God’s mercy until the sacrifice which she made at the foot of the cross. “Mary, then, is the one who has the deepest knowledge of the mystery of God’s mercy. She knows its price, she knows how great it is” (DM 9).

She also proclaims God’s merciful love from generation to generation since the day when she sang the Magnificat at the threshold of her cousin Elizabeth. Mary leads people to the sources of the Saviour’s mercy. The merciful love of God in the history of the Church and the world continues to manifest itself in Her and through Her. John Paul II writes that “this revelation is especially fruitful because in the Mother of God it is based upon the unique tact of her maternal heart, on her particular sensitivity, on her particular fitness to reach all those who most easily accept the merciful love of a mother” (DM 9).

Mary is also Mother of Mercy because by her intercession God’s mercy comes into the world in the form of all graces. Her motherhood towards all people lasts without interruption. The Second Vatican Council emphasizes that “being assumed into heaven she has not laid aside this office of salvation but by her manifold intercession she continues to obtain for us the graces of eternal salvation. By her maternal charity, she takes care of the brethren of her Son who still journey on earth surrounded by dangers and difficulties, until they are led into their blessed home.” (LG 62).

Mary is called the Mother of Mercy, Our Lady of Mercy, or Mother of Divine Mercy, and in each of these titles, as Pope John Paul II writes, there is a deep theological meaning. These titles in fact “speak of her principally, however, as the Mother of the Crucified and Risen One; as the One who, having obtained mercy in an exceptional way, in an equally exceptional way “merits” that mercy throughout her earthly life and, particularly, at the foot of the cross of her Son” (DM 9). She proclaims and implores it for the whole world.

The title ‘Mother of Mercy’ first appeared in the devotion to Mary, in the spirituality of the Church, and only afterwards in theology. The prayer “We fly to your patronage”, known since the fourth century, in the original version began with the words “Beneath thy mercy we take refuge, O Mother of God”. The anthem “Hail, holy Queen, Mother of Mercy” has also enjoyed great popularity in the history of the church. The theology of Mary, the Mother of Mercy, has appeared not only in prayers but also in sermons. In the eleventh century St. Fulbert believed that Mary is the Mother of Mercy because she brought forth Christ, “the very Source of mercy, who washes away all faults of our lives.” However, she exercises her mercy towards people by an extremely powerful intercession. St. Fulbert is the author of the phrase used up to this day, “Mater Misericordiae et pietatis”, Mother of Mercy and Compassion, which according to St. Fulbert, refers to the interior predispositions of the Mother of God (Mater Misericordia) as well as the acts she performs; in the language of the time pietas meant ‘deeds of mercy’.

Devotion to the mercy of Mary in its devotional and theological aspects was developed in the teaching of St. Anselm of Canterbury (+1109). He wrote no strictly theological treaty on mercy of Our Lady, but at that time prayers and sermons served as theological works, because they presented the mysteries of the faith as if directly, namely at the level of the practice of the faith. St. Anselm wrote three prayers that call on the mercy of Our Lady, these three corresponding to different stages of a human being striving after perfection. The content of these prayers indicates that the source of the mercy of Mary is Christ Himself. He “for mercy’s sake became the Son of a Woman; she for mercy’s sake became the Mother of God.” Both of them exist “for the salvation of sinners.” In the third prayer St. Anselm turns to Mary as a son s to his Mother and to Jesus as a brother to his Brother, Jesus. St. Anselm says that the Mother of God is our Mother also. He closely connects Mary with Christ, Her mercy with the mercy of Her Son, and Her part in our salvation and sanctification as completely subordinate to Jesus.

St. Bernard of Clairvaux (+1153) contributed to the widespread consolidation in the Church of the devotion to Mary as the Mother of Mercy. He rested his teaching of Mary’s mediation on the notion of mercy. St. Bernard preached that the Mother can plead everything of the Son and that Her heart is extremely sensitive to people’s needs. St. Bernard wrote that “What we thus need is a mediator with the Mediator and no one is more useful to us than Mary.”

In the history of devotion to the mercy of Mary in prayers, songs and sermons, there are threads which oppose the mercy of Our Lady to the righteousness of Christ and God the Father, and in the extreme form, which concede mercy only to Mary. Anselm of Lucca claimed that after the Ascension, Christ passed the whole heritage of mercy to his Mother and that He left to Himself justice. This view, through the writings attributed to St. Thomas and St. Bonaventure, became common among theologians of the fourteenth and fifteenth centuries and continued in Mariology for a long time. Sometimes such views went so far as to deny Christ all mercy, which is totally contrary to the Scriptures because He came into the world to save what was lost.

The naming of Mary as the Mother of Mercy appeared quite late in the teaching of popes, only in the sixteenth century, initially in the context of titles of related or similar meaning. Pius VIII wrote that “She is the Mother, the Mother of pity and grace, the Mother of mercy, to whom we were entrusted by Christ dying on the cross, so that as He intercedes for us before the Father, so she may intercede for us with her Son.” His successors wrote about the Mother of Mercy in a similar way. It was not until Pope Leo XIII, who developed the teaching on the spiritual motherhood of Mary, that the situation changed. He considered her mercy as one of the manifestations of her motherhood to people. Pope Pius XII also associated Mary’s mercy with her motherhood of God and her participation in God’s mercy.

Chapter 9 of John Paul II’s encyclical Dives in Misericordia, entirely devoted to the Mother of Mercy, is particularly remarkable. Although this chapter is quite short, it is extremely rich in theological topics which justify giving this name to Our Lady. For John Paul II states that on the one hand she obtained the mercy of God in a complete, particular and exceptional way, which she expresses in Her Magnificat, but she also “made possible with the sacrifice of her heart her own sharing in revealing God’s mercy. This sacrifice is intimately linked with the cross of her Son, at the foot of which she was to stand on Calvary” (DM 9). Mary, “through her hidden and at the same time incomparable sharing in the messianic mission of her Son, was called in a special way to bring close to people that love which He had come to reveal” (DM 9). She, being the mother of all people, also mediates with God to implore mercy for the world.

Therefore in Dives in Misericordia John Paul II emphasizes the mercy of Mary implicit in the Redemption accomplished by Jesus, her Son. However, in the encyclical Veritatis Splendor (written thirteen years later), the pope gives new threads for the title of Our Lady of Mercy: God’s being in our midst and the gift of the Holy Spirit obtained for us. John Paul II writes that Mary is the Mother of Mercy because she gave Jesus–the Incarnate revelation of God’s mercy (VS 118) to the world. This mercy does not only consist in the liberation of man from sin, but also in God’s presence among us. Finally, “this mercy reaches its fullness in the gift of the Spirit” who makes all things new: renews the face of the earth, which in practice means that the Holy Spirit enables man to do good and to do the will of God, and above all gives man the power to become, like Mary, “immaculate,” that is to say, the power to sin no more.

Prepared by Sr. M. Elżbieta Siepak, ISMM, on the basis of: