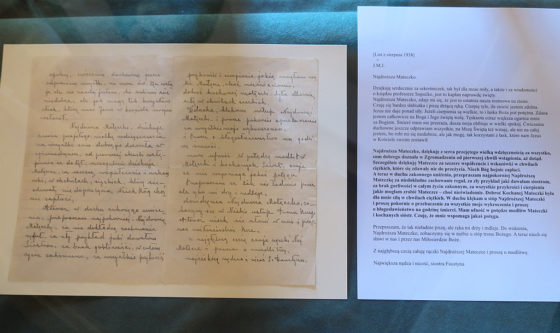 Apart from the “Diary”, Saint Faustina has also left the letters and cards with wishes. Among the letters which have been preserved until today, we find: 19 letters which she sent to Rev. Michael Sopoćko – her spiritual director from Vilnius; 1 letter to Father Joseph Andrasz, S.J. – her confessor and spiritual director in Cracow; 3 letters to the Superior General, Mother Michaela Moraczewska; 1 letter to the house superior in Cracow, Mother Irena Krzyżanowska; 9 letters to Sister Justyna Gołofit, whom Sister Faustina had looked after in the spiritual sense, acting as a so-called “Angel”; 11 letters to Sister Ludwina Gadzina for whom Saint Faustina was also an “Angel”; and 1 letter to Sister Beniamina Zarębska. In the Congregation archive there are also cards with short, rhymed wishes addressed to Mother Irena Krzyżanowska and some other sisters. Occasional letters to her family have also been preserved: to her sisters Eugenia, Natalia and Wanda, as well as dedications on holy cards for her parents. In the book “The Letters of Saint Faustina” there are also 9 letters which Michael Sopoćko sent to her. They have been published as they do not only enable the reader to see what the relationship between Sister Faustina and Father Sopoćko was like but, above all, they also show their mutual efforts to discern God’s will as well as their common pursuits pertaining to the fulfilment of the mission of the Apostle of Divine Mercy. The letters, wishes, dedications on holy cards reveal and complete the spiritual portrait of the Apostle of the Divine Mercy. They reveal the countenance of a mystic and prophet totally involved in the cause of proclaiming the message of Mercy to the world and, at the same time, they show a person who is really and truly concerned about man, his salvation and human needs.

Style of the Letters 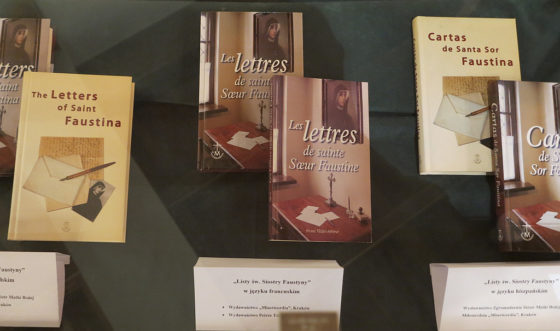 The letters sent by Sister Faustina to her spiritual director, religious superiors, fellow sisters, and family all point to the fact that Saint Faustina had mastered the principles of letter-writing. Each letter begins with the sign of the cross and the abbreviation “J.M.J.” (Jesus, Mary, Joseph) placed in the upper left corner. In the upper right corner, or else at the bottom of the letter, the authoress usually put the name of the place and the date. In the middle of the page, she wrote the polite appellation of the person to whom she addressed the letter: “Reverend Father”, “Most Reverend Father”, “Dearest Father”, “Most Reverend Dear Father in Jesus Christ”, “Most Reverend, Dear Father!”, “Reverend and dear Father”, “Dear and beloved Father in Jesus Christ”, “Dearest, beloved Mother”, “Dearest Mother”, “Reverend Sister Justyna”, “Dearest Sister in Christ!”. In a number of letters, above the polite appellation, she wrote the words “Jesus, I trust in You!” , which were to be placed on the image of the Merciful Jesus.

At the beginning of her letters, Sister Faustina usually referred to the current situation and problems which she encountered. She informed the addressee about the state of her health and the duties she was currently engaged in at the convent. She described her spiritual experiences, her enounters with the Lord Jesus and her interior visions. She also raised issues associated with the propagation of the devotion to the Divine Mercy. She enquired about the health of her spiritual director and assured him of her continual prayers for him. She ended each letter with a polite formula, such as: “I kiss your hand and ask your prayers and blessing. I am united with you in prayer in the Merciful Heart of Jesus for the conversion of sinners – Sister M. Faustina”; “ I kiss your hand and ask your priestly blessing. Your daughter in God – sister M. Faustina”; or “I kiss your hand with the deepest reverence, dear Father, and am sending you my greetings in the Lord – Sister Faustina”.

In the letters adressed to Mother General Michaela Moraczewska, there prevails the tone of respect and seriousness. Sister Faustina addresses her superior in a very solemn way: “Dearest and beloved Mother” or else “Dearest and beloved Mother Superior”. She closes with a polite formula which is full of respect: “I kiss your hand, dear Mother, and ask your prayers – sincerely yours, Sister Faustina”. She writes with great trust to the Mother General, as to a very close person who understands her problems.

The letters written to Sister Justyna Gołofit and Sister Ludwina Gadzina, for whom Sister Faustina acted as an “Angel”, that is, a spiritual guardian during their postulancy, are much more personal in character. Striking is their style of personal confidence, the desire to share the good of their vocation and to lead them to a close friendship with Jesus. Sister Faustina also tells her addresses about her own duties as well as about other sisters; she sends her greetings, assures the sisters of her continued prayer for them and at the same time commends herself to their prayers. The letters begin with the sign of the cross and are marked with the initials J.M.J. (Jesus, Mary, Joseph), whereas they end with the formula: “I remain united with you in the Heart of Jesus – Sister Maria Faustina”.

The fundamental content of the letters to Father Michael Sopoćko is made up of Sister Faustina’s interior experiences and that is why their style is somewhat reminiscent of the “Diary”. It is with great sincerity and directness that Saint Faustina tells her spiritual director about her interior encounters with the Lord Jesus. She quotes exactly the words used by the Saviour and describes in detail her interior state. She also asks Father Sopoćko how she should act in certain especially difficult situations; the topic of implementation of Jesus’ orders returns in these letters particularly frequently. Sister Faustina’s great respect and obedience to her spiritual director is striking in the letters. The problems associated with the revelations of the Merciful Jesus were treated as the greatest secret by Saint Faustina and that is why she never mentioned them to anyone in her letters, except to Father Sopoćko and Mother General.

In her letters to the other sisters and members of her own family, Saint Faustina wrote both about spiritual matters as well as about common everyday problems. Here this great mystic and Apostle of the Divine Mercy reveals her beautiful human face: her concern about the spiritual life and the joy of serving God in the convent, as well as about health and material needs. She always puts matters of the spirit in the first place, for instance by encouraging Sister Justyna Gołofit, for whom she was an “Angel”, that is, a spiritual guardian during her postulancy, to remain faithful to Jesus, the only Bridegroom. She comforts her friends in their sufferings and assures them of her continued prayer. She also tells them about her daily chores and events in the convent. She tells Sister Ludwina Gadzina about the sense of suffering and the everyday effort one has to make in order to become united with Christ. In these letters she also mentions certain contemporary political issues, her concern about Russia and Spain where the communist revolution wrought a terrible havoc.

In her letters to the closest family Sister Faustina asked about her parents’ health. As a loving daughter and sister, she told her relations about the joys and worries of religious life and assured them of a remembrance in her prayers. She was also interested in the plight of her sister Wanda who wished to join the Congregation of the Sisters of Our Lady of Mercy.

In the rhymed dedications and wishes written to sisters for Christmas, the New Year, Easter or on their anniversaries of taking the religious vows, one is struck by the authoress’ poetic talent and her considerable theological intuition as well as trust in God and His mercy. The short dedications for her parents, written on holy cards, reveal how much Sister Faustina loved them and how often she thought about them and prayed for God’s blessing to be upon them.