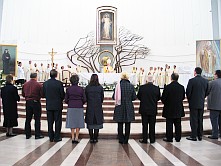 After a year of volunteer work in the “Faustinum” Association one can apply for membership. Members choose, from among the many ways of pursuing Christian perfection, the one revealed by St. Sister Faustina, enter deeper into her spirituality and apostolic mission, and become the closest associates of the Congrega- tion of the Sisters of Our Lady of Mercy, who serve its charism in the world. There is no need to apply for membership after a year of volunteer work. One can remain a volunteer for life. It is important to be careful in recognizing the will of God for one’s life and to fulfil it faithfully.

Any person who has attained majority (completed the eighteenth year of age) may become a member of the “Faustinum” Association. The person should recognize within himself or herself the charism of St. Faustina and wish to become more fully involved in the work of proclaiming the message of Mercy by deed, word, and prayer. This also includes the duty of following the formation programme given in the Association (in Polish, English, German, French, Czech, Slovak), and excludes the option of belonging to other communities which require formation. The mandatory formation programme in

the “Faustinum” Association lasts 4 years, and it concludes with a written formation exam. The exam may be taken up to 8 years after the date of acceptance as a Faustinum member. In the event that a member fails to take the exam or does not pass it with a positive grade, he or she has to return to the ranks of volunteers of the “Faustinum” Association. On the other hand, if a member passes the exam with a positive grade, he acquires the right to wear the Faustinum badge and move on to the stage of permanent formation.

In addition, members are obliged to receive the sacraments regularly, to go through the formation given in the Association (either individually or in a community), to strive after forming within themselves an attitude of trust towards the Lord God and mercy towards their neighbours (by performing in the course of each day at least one act of mercy, out of love for Jesus, through deed, word, or prayer), to practice the forms of devotion to Mercy handed down to us by St. Faustina (praying the chaplet of The Divine Mercy on a daily basis, venerating the Image of Merciful Jesus, celebrating the Feast of Mercy, and praying at the Hour of Mercy), to observe the statutes and the resolutions of the Association, and, finally, to pay membership fees. Where someone is unable to fulfil this last obligation, he or she should apply in writing for permission to be exempted from having to pay the membership fee and state the reason for the request.

By becoming apostles of The Divine Mercy who are more deeply involved in the mission of St. Faustina, Association members are able to take advantage of all the promises which the Lord Jesus passed on to us through St. Faustina (particularly those which are recorded in her Diary under the following entries: 1075, 1540, 1521); desiring to participate more actively in the work of the Association, members may vote or be elected to its authorities, receive a membership card of the Association and wear the Faustinum badge, and also make proposals and suggestions concerning the activity of the Association.

When applying for membership, the following documents should be submitted to the secretariat of the “Faustinum” Association:

After getting acquainted with the submitted documents, the Executive Board announces in a secret ballot its decision concerning membership.

Persons who have been accepted as members of the “Faustinum” Association receive a special blessing from the hands of the celebrant (at a liturgical ceremony of St. Faustina which is held in the Shrine of The Divine Mercy on October 5); they also receive the Rule of the Members of the Faustinum as well as membership cards which are handed to them by the Superior General of the Congregation of the Sisters of Our Lady of Mercy or a person designated by her.