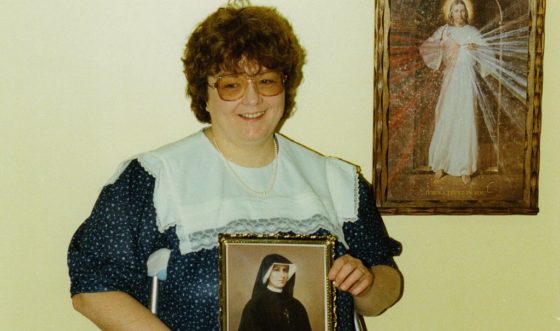 I didn’t believe in miracles
Testimony of Maureen Digan

I’m sure that after my testimony some, if not all of you will ask, “Why her and not me or one of my dear ones?” Well, I keep asking myself the same question: why me and not my son, who has been ill for years?

At the age of 15 I was struck down with a disease called lymphedema. Between the age of 15 and 20 I had 50 operations. For a decade I was in and out of hospital all the time. I was hospitalised for periods from 1 week to 12 months at a time. At 19 I had a spinal operation and for 2 years was paralysed from the hips down. When I was 20 I had my first amputation. But the disease became so aggravated in the rest of my leg that I had to have it amputated up to the hip.

My husband Bob, a deeply religious person of tremendous faith and prayer, felt that he should take his family, that is myself and our sick son, to Poland. He went to Eden Hill, Stockbridge, the national shrine of the Divine Mercy in the USA, and talked the matter over with Father Seraphim Michalenko, asking if he could accompany us on our trip to Poland. Father Serafin, who was handling the cause of Sister Faustina in the USA, received consent from his superiors and we set off on the difficult journey to Kraków.

On 28 March 1981 I went to confession in Kraków. It must have been my first confession for many, many years. I felt much closer to Jesus and Sister Faustina, but maybe not close enough. That evening, 28 March, we prayed at the tomb of Sister Faustina, especially for a cure. Still somewhat mistrustful, I said to Sister Faustina, “Okay, Faustina I came a long way, now do something.” And the pain stopped, the swelling disappeared. I thought it must have been a symptom of neurosis as I didn’t believe in miracles. I stuffed my shoe with a napkin so that no-one should notice my swelling was gone. And I stopped taking my medicine. From that moment on my disease disappeared completely. I had visited four different doctors, who told me that my disease was incurable, that it never went into remission, and did not respond to any medication.

Our Lord chooses whoever He wants. We thank him from the bottom of our hearts for my healing, which will help to beatify Sister Faustina. It’s absolutely true what you read in her Diary: „The bigger our misery, the greater our right to Your mercy”.