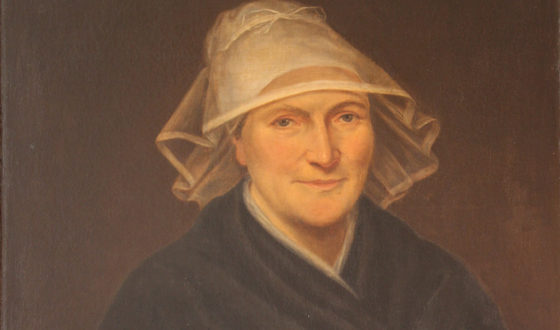 Co-founder of the Congregation

I love all the attributes of God.

I humble myself before His greatness, power, and justice.

However, while praising justice, I say:

Lord, keep it for Yourself,

Do not use it for my children, nor for me.

Mercy, however, delights me more

than other Divine perfections,

and I never cease to cry mercy on my daughters and on myself. 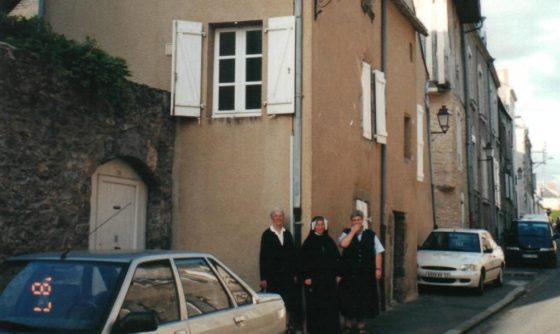 Mother Teresa Rondeau was born on 6 October 1793 in Laval, France, and was christened Theresa Agatha. Her parents (Teresa Deliere and Gabriel Rondeau) came from a village, but moved to the suburbs of Laval, where the father had a blacksmith’s forge, which provided enough to support the family. The Rondeaus had four children, of whom two died (Maria at 2 years and Francis at 2 months). Teresa Agatha survived and her brother, Gabriel, 18 years younger.

Teresa grew up in a pious family, took seriously the catechetical teaching of their priest and took to heart her parents’ teachings on the need to share with those poorer than themselves. As a result she gave away her clothes to her poorer peers, and her food to the needy. She often performed such charitable deeds without her mother knowing, and her zeal suggested to her many new ideas. Her mother kept Teresa’s excessive charitable zeal within bounds, whereas her father was his daughter’s “silent accomplice”. In the Rondeau family the mother epitomized prudent practicality and the father loving kindness.

Teresa went to a school run by nuns, and she learned catechism in the parish of St. Veneranda. There she made her First Holy Communion at the age of 11. She was able, obliging and cheerful; she had good leadership skills, and quickly won the liking and hearing of her peers. She did not take part in the activities common to most girls of her age. Her world was the home, church and people in need. On graduating from secondary school she won a prize, which gave her the opportunity to take up work in her acquired profession. By the time she was around 20 years old she was in charge of her own ironing business, organized in one of the rooms of her family home.

The good reputation of the business run by Teresa allowed it to thrive, and several women were employed there. Her parents willingly referred trainees to her, not only because of the professionalism of her work, but primarily because of the spiritual atmosphere which she introduced. Customers liked her, girls felt drawn to her, because she was full of tact, charm, and respect for her workers, while also expecting a high standard from them. The regulations of her ironing shop outside of work included, among others, prayers, singing, and a period of silence. On Sundays and Holy Days, Teresa organized trips outside the city for her co-workers.

Her first painful experience was a blow to her good reputation, following the birth of her brother Gabriel, eighteen years after her own. It was rumoured that he was her illegitimate son. It was very painful to Teresa to find herself a victim of suspicion. To comfort her, her parents offered her the role of godmother. Then, to add to it all, her beloved father was kicked by a horse and died suddenly. After his death, Teresa acted as head of the household and went in for extensive charity work, among other things, organizing help for near-starving prisoners of war; and she also involved her workers in this work of mercy.

When in 1816 the Jesuits came to Laval to preach missions, Teresa found them housing and took care of their laundry, including ironing their personal clothes and church vestments. She organized a choir at the church of St. Michael the Archangel. Among the Jesuits who arrived was Father Jean-Etienne Chanon, who became her strict confessor and spiritual director. It was he who entrusted Teresa with the first three newly converted “Magdalenas”. Two other priests also directed other girls to her, and so within a few weeks she had a dozen of them under her care. At first they did not live together. Teresa visited them in their homes, looked for work for them and gathered them together for catechism classes. Because she enjoyed the respect and confidence of the clergy and of important and wealthy people, she was able to gain the resources needed to carry out her work. When the number of girls increased significantly, and the donations were not sufficient, she turned to her own meagre resources.

Following the advice of Fr. Chanon, she gathered several of her workers and founded a kind of a charitable association for helping fallen women. However, at the beginning of this work she encountered opposition and misunderstanding among the people of Laval. At that time she experienced a painful defeat. Young girls and ladies from “decent homes” began to move away from her, her charges began to leave, and some returned to their former practices. Depressed, Teresa saw no alternative but to ask Father Chanon to be relieved from this burden, which seemed to her to be more than she could bear. She begged him ever more insistently to let her enter a convent – she wanted to become a sister in the Congregation of Sacré-Coeur.

When she had a positive response from the Sisters of the Sacré-Coeur, the Jesuit, Father Chapell, with whom she shared her experiences, told her clearly that entering an existing Congregation was not God’s Will for her. He added that God was calling her to found a new work in Laval, and prophesied that this new work would encounter great difficulty: everyone would be against her, sometimes she would run out of bread, and she would even be beaten, but – he added: Take heart, be calm. God will call you when the time comes.

On 5 August 1818, 25-year-old Teresa Rondeau came to Bordeaux ,to Mother Teresa de Lamourous (1754-1836) who founded and ran the “House of Mercy” for prostitutes who voluntarily wanted to change their lives. There she gained experience and learned the methods of apostolic work, living by the rules that were binding in the House of Mercy. The knowledge she gained in the house was complemented by talks and conferences with Mother de Lamourous and Father Guillaume Chaminade. On 10 October (after two months), Teresa was allowed to take the habit, and during the ceremony she received the name: Francesca Borgia; then on 15 October she took her private vows heard by her confessor in the confessional. On the way to Laval she stopped at Le Mans, to meet with Bishop Michael de Pidoll and ask him for permission to open a house for penitent women and the chapel in Laval. She also gained permission to organize a religious congregation as a founder of a new work independent from Bordeaux.

Teresa returned to Laval and by 1 November 1818 had already brought fallen women, as they were called at that time, to her family house in Hameau Street, thereby opening the first House of Mercy for penitent women in Laval. The house was arranged as follows: it had a convent with a refectory, a dormitory for the sisters and a separate dormitory for the penitent women, parlour, laundry, ironing room, infirmary, and kitchen; all this was done using only temporary partitions to separate the rooms. Her mother, Teresa Deliere, was a great help to her in organizing the work. Teresa gave the following names to the first three penitent women: Faith, Hope, and Love. In spite of having so little space and very modest, even poor conditions, the number of those who voluntarily wished to improve their lives steadily increased. Teresa found support for her work from Fr. Changeon, the parish priest of the parish of St. Veneranda, and above all from the local bishop, de Pidoll, who gave her all the permits, and appointed a priest to celebrate Sunday Mass in the House of Mercy with Exposition of the Blessed Sacrament and Benediction. Jesuits from the church of St. Michael the Archangel were responsible for the spiritual ministry. 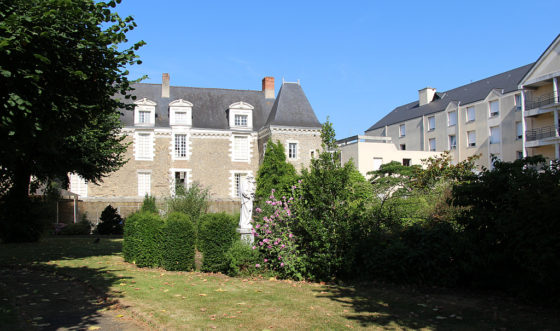 Over the years, the number of penitent women and sisters increased in Laval. In 1820, that is two years after the foundation was established, there were already 28 of them, three sisters, Teresa and a few people to help. Then there was also her mother with Gabriel (8 years old), so altogether there were 36 people in a building intended to house one family only… In this situation, Teresa started looking for a new place for her work. She found a property nearby, in Paradis Street. On 1 September 1826, after several years filled with many difficulties associated with lack of funds to buy the house, getting into debt, and waiting for loans, the sisters and their charges at last moved to a larger house. In 1840 Teresa opened a branch house in St. Joseph des Champs near to Laval, and in 1855 another branch house in Quimper and still later in Kernisy near Quimper.

Mother Teresa Rondeau did not actually consider setting up a religious congregation on a proper legal basis. She cared, however, for the life of the sisters in accordance with the evangelical counsels, prayer, and the spirit of penance and sacrifice. Father Chanon wrote for them the constitutions governing the sisters’ life. During the lifetime of their Foundress the sisters did not take perpetual vows, but every year after the retreat they repeated temporary vows before the confessor in the confessional. Their clothes were no different from those worn by middle class Breton townswomen, and consisted of a black dress, scarf and cap. The house in Laval was under the authority of the local bishop.

From 9 November 1861 to 16 July 1862 Mother Teresa Potocka née Ewa Sułkowska, foundress of the Congregation of the Sisters of Our Lady of Mercy in Poland stayed at the House of Mercy in Laval, together with Tekla and Antonina Kłobukowska. 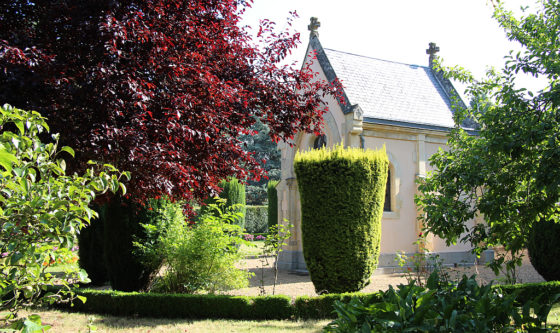 Mother Teresa Rondeau died on 16 July 1866 in Laval at the age of 73, having devoted 48 years of her life to the limitless service of mercy, by saving morally lost women. Her tomb is in a garden within the grounds of the General House of the congregation in Laval.