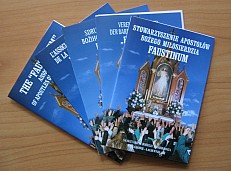 On 6 March 1996, at the Shrine of The Divine Mercy in Kraków-Łagiewniki, and in response to the request of Mother Paulina Słomka, Superior General of the Congregation of the Sisters of Our Lady of Mercy, Cardinal Franciszek Macharski, Archbishop of Kraków, established the “Faustinum” Association of Apostles of The Divine Mercy. The Association comes under both Church and Civil Law, that is it has both Church and Civil legal status. It operates in the diocese of Kraków and, with the consent of Bishops Ordinaries, also in other dioceses in Poland and abroad. The Association is for priests, consecrated persons and lay faithful from around the world who, under the leadership of the Congregation to which St. Sister Faustina the Apostle of The Divine Mercy belonged, and under the spiritual guidance of the priests of the Society of Jesus, wish to join in the work of proclaiming the message of Mercy to the world through their life witness in word, deed and prayer. The “Faustinum” Association has as its main task the running of a formation programme for these Apostles of The Divine Mercy, a course which is conducted in several languages. 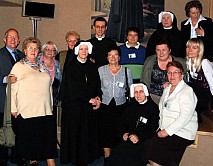 Over a considerable period of time, people have been contacting the Congregation of the Sisters of Our Lady of Mercy to ask whether there could be a tertiary order, the Apostolate of Sister Faustina, and a book where the names of worshipers of The Divine Mercy could be recorded. They had a desire to link in some way with the Shrine of The Divine Mercy in Kraków-Łagiewniki and with the Congregation to which St. Sister Faustina belonged. Before taking action the Congregation of the Sisters of Our Lady of Mercy spent many years discerning the Will of God in this matter so as to be certain of what God wanted. Discernment, alongside research into the heritage of St. Sister Faustina, was accompanied by intense prayer.

Shortly afterwards the sisters started to work on the statute “on their knees”. Since the idea was not to create any organization or association according to an existing model, but to ‘read’, this time in detail, the form such an association should take. And then an amazing thing happened. A mere three weeks after the statutes establishing the “Faustinum” Association of Apostles of The Divine Mercy on 6 March 1996, (the fruit of much consultation) the Holy Father John Paul II, on 25 March 1996, issued Vita Consecrata, an Apostolic Exhortation on the consecrated life and its mission in the Church and in the world. The similarity between the ideas, thoughts and tasks, planned for the relationship between consecrated persons and laity in the statute of the “Faustinum” Association and those described in the exhortation Vita Consecrata is so great that, if we did not know the dates, we might assume that the statute of the “Faustinum” Association is the fulfilment of the assumptions in the exhortation Vita Consecrata, where the Holy Father says that “Today, often as a result of new situations, many Institutes have come to the conclusion that their charism can be shared with the laity. The laity are therefore invited to share more intensely in the spirituality and mission of these Institutes” (VC 54). It is the Holy Spirit Who gives the charism to a particular religious family and to every sister of such a congregation. The Holy Spirit likewise gives those who are to participate in the charism, but who are outside the Congregation. It is exactly this sort of gifting which is taking place in the “Faustinum” Association and especially in the case of its members. These are individuals chosen by God to participate in the spirituality and mission of the Congregation of the Sisters of Our Lady of Mercy, as revealed by St. Sister Faustina.

How does the “Faustinum” Association differ from other associations or communities of apostles of The Divine Mercy?

Priests, consecrated persons and lay faithful are members of the Association, first as volunteers and then as members who, after completing basic formation, may swear oaths of service and dedication to The Divine Mercy.

The quarterly “Message of Mercy” is the press organ of the “Faustinum” Association. It serves in the formation of the apostles of The Divine Mercy, and acts as a liaison in this great community of people sensitive to the mystery of God’s mercy, and wishing to inscribe it in their hearts and deeds.