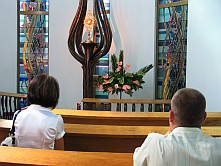 The communities of the “Faustinum” movement, along with volunteers and individual members, join in the prayer ministry at the Shrine of The Divine Mercy in Kraków-Łagiewniki and in their parishes, imploring God’s mercy for the whole world. 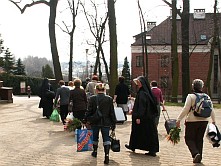 As far as possible and if there is demand, the “Faustinum” Association also organizes pilgrimages, especially to places connected with the life and mission of St. Faustina. Her life touched a number of places in Poland and Lithuania (Vilnius). Special routes have been opened in Kraków and Łódź to commemorate the places where she lived and carried out the mission of Mercy. Members and volunteers of “Faustinum” also meet on other occasions, including for example recreational campfires. 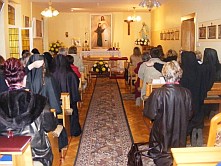 Members and volunteers of “Faustinum” based in their parishes are concerned with the festive celebrations in honour of The Divine Mercy and of Saint Faustina. They are especially involved in preparation for the Feast of Mercy on the first Sunday after Easter and in the liturgical celebrations for the Memorial of Saint Faustina on 5 October. They involve themselves in many works of mercy in their workplaces and parishes, so that always and everywhere, and in every way possible, they manifest God’s merciful love for man on earth.