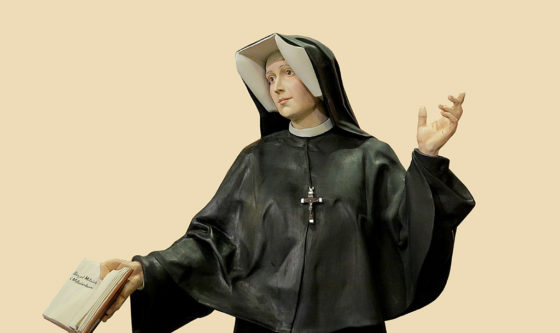 On the eve of the hardest test since the time when almost ten centuries ago the Lord God called us to serve Him, the test which He decided to put our nation to, it pleased Him to give us a special proof of His Mercy – a call to turn to Him with more and more trust. In order to do that He made use of the modest Polish girl, Helena Kowalska – whose religious name was Sr Faustina from the Congregation of the Sisters of Our Lady of Mercy and who, having spent only 33 years on earth, started living the better life on the 5th October, 1938. She is remembered as one of the souls that God endowed with special graces. The main idea of everything that Christ, the Lord conveyed to her interiorly was the mystery of the Divine Mercy and our duty to respond to it with the fullness of hope. The beautiful image of the Lord Jesus, in which, as if, He is coming out to meet us and He is opening His breast to us, from which the rays of His graces spring, is to make us aware of the Divine Mercy mystery, whose eternal embodiment Jesus has always been, while various prayers and invocations that, under Divine inspiration, were composed by Sr Maria Faustina, are to rouse souls to boundless trust; the pious nun devoted her life to the spread of the trust among us .

The work to which God called her and which was silent and hidden during her life, is beginning to spread and move souls, strengthening them during the severest trials sent by God, which nobody has lacked during the last few years. No wonder – there is nothing in it that will not spring from the purest sources of the Christian Revelation, that will not correspond with the most orthodox traditions of the Christian faith and morality. Therefore, we can accept Sister Faustina’s calls into our souls and respond to them wholeheartedly, because everything in them resounds with a clear note of the teaching of the gospel.

In my opinion there is a wondrous bridge, a wondrous bond between this grave (the grave of the Servant of God – Sister Faustina – in Łagiewniki) and Rome. May I say this? We have heard the surprising words of the Holy Father: ’Since the very moment when I was elected Pope I have known that I have to write an encyclical on the Divine Mercy. The first one, „Redemptor hominis” – „The Redeemer of Man”, was, as if, an introduction, a transition’. Is there not any bridge? Is there not any bond between the Bishop of Cracow, today – the Bishop of Rome, Jesus Christ’s curate and the humble Nun, her life, sanctity and everything that the Merciful Jesus revealed to her?

The phenomenon of Sister Faustina makes her one of the saints of universal significance. There is no wonder that it is precisely Sister Faustina who is becoming immensely popular in other countries, outside Poland (…). The Message of Mercy, which Sister Faustina wrote down and which is spreading through the world, seems to be the greatest need of our times.

Saint Faustina was discovering the fullness of the Divine Mercy

All initiatives connected with mercy and charitable works which have originated from them have not exhausted all contents that God, who is rich in mercy, reveals. While charitable works pertain mostly to help as regards physical weaknesses, the mercy which Saint Faustina was discovering concerns, above all, the sufferings and illnesses of the soul. Saint Faustina warns souls who are paralysed, sleepy, mutilated, in agony, full of despair or going downhill – towards damnation because they have not experienced the warmth of the Heart of God. Souls need to be supported by others in order to trust Christ and honestly say: ’Jesus, I trust in You’. Mercy which is exercised by people is to encourage endangered souls to trust Him completely. For revealing this truth Sister Faustina paid with great suffering which was caused by those closest to her. Today we are not surprised at this. On the contrary, we acknowledge that the suffering, as it is when a new being is born, was necessary in order that a remedy for the contemporary illness be created. The illness which people have suffered from, after the experiences of the First and Second World War, after devilish manifestations of hatred, for instance, extermination camps as well as other ways of treating man with disdain. Sister Faustina suffered because she could not get the order of Christ through to the world that was closest to her, to her sisters and the hierarchy. Suffering intensified her feeling of weakness and helplessness and this, from time to time, made her less ardent, as well as made her lose zeal and doubt more and more. Divine Providence found ways to present the truth of the Divine Mercy publicly because God wanted Sister Faustina to tell the world about it.

The student at the school of Mercy [Sister Faustina] was endowed by God with spiritual strength of a giant. She spread the Divine Mercy, was its apostle and she lived for neighbour – that became the only way she lived her life: ’My name is to be sacrifice’. In her life Sister Faustina realized the connection of the devotion to the Divine Mercy with the firm ethical requirement to love neighbour. She did it so meaningfully that our turn to her directs and leads us to the Merciful Jesus.

On our way to the Jubilee Year marking two thousand years that have passed since ’the Word became Flesh’ we already think now: should we not do something that would be, for us and next generations, a strong sign that we will have not slept through the time of grace (…). For many years I have had a firm conviction that our response to the Divine Mercy should be this sign! God’s providential love made it happen that the Blessed Sister Faustina, the apostle of the Divine Mercy, lived in Cracow-Łagiewniki and she died there 60 years ago. Today the image of Christ with the inscription: ’Jesus, I trust in You’ is known all over the world. The Holy Father frequently speaks about it and people from all the continents pilgrimage to Łagiewniki, as to the greatest sanctuaries. They often say: this is the capital of the Divine Mercy. Therefore, should we not accept this gift? Should we not show God and people, by our solicitude for the Divine Mercy worship and its sanctuary in Łagiewniki that we have really taken Christ – the born and crucified Redeemer of man – into our own home?

The complete message of Sister Faustina, the humble nun from the Congregation of the Sisters of Our Lady of Mercy, encourages us to worship the Divine Mercy both by calling upon it with complete trust and by being merciful towards people.

Today the manners of calling upon the Divine Mercy, which were presented by Sister Faustina, are known all over the world. These are: worship of the image of the Lord, the Merciful Jesus, along with its prayerful profession: ’Jesus, I trust in You’, celebration of the Feast of the Divine Mercy on the second Sunday after Easter, the chaplet to the Divine Mercy and prayer at the Hour of Mercy – the time of the Lord Jesus’ agony.

The two conditions required for the true devotion to the Divine Mercy are also known all over the world: it is necessary to always trust in the Divine Mercy and to exercise mercy towards neighbour – by deed, word and prayer. Sister Faustina conveys to us a call which is truly the one of Christ: ’Blessed are the merciful, for they shall obtain mercy’ (Matthew 5:7).

God’s gifts – also the one of Sister Faustina’s canonization – are to convert us to mercy. Only the one whose thoughts, words, deeds, way of life have become merciful can proclaim it and be its apostle. Then he proclaims what he lives by! Therefore, he proclaims that he trusts the Lord Jesus and that he himself builds up his life by exercising mercy towards others. This call pertains to everyone, no matter what his place in the Church is: lay Catholics, priests, monks and nuns.

I direct my gaze towards Cracow-Łagiewniki. It is from there that the message of the Divine Mercy and Saint Faustina’s mission, whose centenary of baptism we are celebrating today, have spread through the whole world. It is a great privilege of Cracow and his pastor to proclaim the message. It is also a task which I take up with humility.

The fact that the blessed Michael Sopoćko, his whole life, 'extolled the Lord’s mercy’ is the key to understand his personality and mission. He became a servant of this Mercy, and when he started to minister to Sister Faustina Kowalska from the Congregation of the Sisters of Our Lady of Mercy he began to serve it in a special manner. As it turned out later, it was a landmark in his life. The Rev. Michael’s wisdom, spiritual sensitivity and sanctity of life were needed in order that God’s message for the whole world was recognized in the visions of the simple Sister.

It seemed to us that the whole of Christianity is behind us, that nothing would surprise us. Actually, in the light of the ’Diary’ [of Sister Faustina] we need to read the Gospel anew, we need new research and new reflections. The whole understanding of what Christianity is and what it could be is only ahead of us.