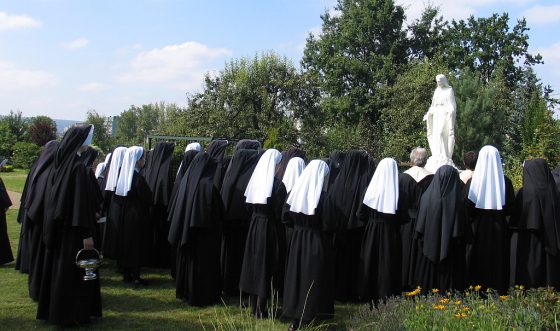 On August 5, the liturgical memorial of Our Lady of the Snows, the Congregation of the Sisters of Our Lady of Mercy celebrates its patronal feast, honoring its Patroness – the Mother of Mercy Incarnate. On this day, the election of Mary as the heavenly Superior General of the Congregation has been traditionally renewed since in 1937, in the form of a special, ceremonial prayer. Saint Faustina wrote in her Diary: I saw the Virgin Mary and She said to me, Oh, how very pleased I am with the homage of your love! And at that moment She covered all the sisters of the Congregation with Her mantle. With Her right hand, She clasped Mother General Michael to herself, and with Her left hand she did the so to me, while all the sisters were at Her feet, covered with Her mantle. Then the Mother of God said hen the Mother of God said, Everyone who perseveres zealously till death in My Congregation will be spared the fire of purgatory (Diary, 1244). This day is the anniversary of the dedication of the Basilica of Santa Maria Maggiore, the oldest church in the West dedicated to the Virgin Mary. Pope Sixtus III, to celebrate the end of the stormy Council of Ephesus (431 AD), which declared the dogma of the divine motherhood of Mary (Theotokos), introduced the feast of the Mother of the Son of God, which was first celebrated in this particular basilica, and with time, successive Popes expanded it to the whole Church. Today, the liturgical calendar of the Church contains the memorial of Our Lady of the Snows, commemorating the miracle associated with the rise of the basilica, and this name is functioning in the minds of the faithful. Therefore, the first circumstance of the establishment of the feast of Mary as Mother of the Son of God – Mercy Incarnate, has been forgotten. For more information about Mary the Mother of Mercy, Her title, worship and iconography in the Church and Congregation, follow the link: Our Lady of Mercy.