Pope Francis and the Łagiewniki Shrine 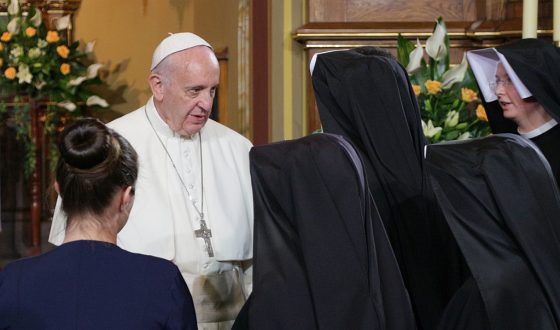 On July 30, Pope Francis visited the Shrine of Divine Mercy. He directed his steps first to the chapel with the miracle-famous image of Merciful Jesus and the tomb of St. Faustina. The distinguished Pilgrim was welcomed by the Superior General of the Sisters of Our Lady of Mercy, M. Petra Kowalczyk, and the superior of the convent in Krakow-Łagiewniki, Sr. Gracjana Szewc. The Pope was enthusiastically greeted by the Sisters of the Congregation of Our Lady of Charity from its Polish and foreign convents, their pupils, apostles of Divine Mercy from the “Faustinum” Association and other collaborators and benefactors. After kissing the relics of the Apostle of Divine Mercy and a short prayer, Pope Francis signed the memorial book with words taken from Scripture: “I desire mercy and not sacrifice”, under which he placed his signature and the date. The Pope made a gift to the Shrine – a cross made of mother of pearl. The Holy Father received a copy of the Divine Mercy image from the sisters, a special copy of the Diary of St. Faustina in Spanish, a chasuble and a stole. The pupils also made a gift to Pope Francis – a painting depicting Our Lady of WYD and the two great apostles of Divine Mercy: St. Faustina and St. John Paul II, who presided over the meeting of young people from all over the world in Krakow. After the exchange of gifts, in a casual conversation, the Pope asked: And will you meet Jesus? Even if you experience weakness, fall, humiliation, sin, Jesus is waiting for you there and reaching out to lift you. These words, though spoken in a select group, relate to every human being and bring hope as the Mercy of God, which continues to reach out to people getting to know and living by Jesus’ message of Mercy, deposited at this holy site after the death of St. Faustina.

After the prayer of “Hail Mary” and a blessing, the Holy Father moved on to the Basilica. First, he greeted the pilgrims gathered in the Łagiewniki meadows. During an unscheduled speech, he said: Good morning, everyone. Today, the Lord wants us to have a deeper experience of His Mercy, so that we never move away from Jesus, even when we think, when it seems to us that we are the worst people out there because of our sins. He loves us as we are, therefore, also His Mercy becomes a reality for us. Let us use this day, so we all could receive the Mercy of Jesus. On the way to the basilica, the Pope met with parents of young children. He walked through the Door of Mercy, and then in the basilica, he confessed 8 people in Italian, Spanish and French (confession for only 5 people was planned, but the Holy Father himself asked for another three). On behalf of the confessors who are serving in the Basilica of the Shrine, the Rector, Fr. Monsignor Franciszek Ślusarczyk, gave the Holy Father an oil copy of the miracle-famous Divine Mercy image to Pope Francis. At the end of the visit, the Pope prayed the “Hail Mary” together with the faithful, gave his blessing and wrote the following in the Memorial Book: In the Jubilee of Mercy, at the World Youth Day in Krakow, I entrust with confidence the youth of the world, pilgrims and their families to the Divine Mercy, so that they can grow up to the attitude of mercy under the care of St. Faustina and St. John Paul.