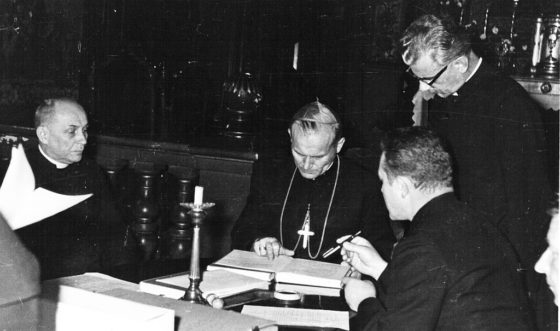 Sister Faustina wanted to be a great saint, raised to the glory of the altar (Cf. Diary 150). Many a time not only did she write about this desire but also unwaveringly strove to be a saint. Her determination was unusual. She wrote: “O my Jesus, You know that from my earliest years I have always wanted to become a great saint, that is I wanted to love You with so great a love that no other soul has ever given You yet” (Diary 1372).

On the 5th October 1938, when she died at the age of only 33, she was considered to be a saint. The reputation of the sanctity of her life was growing along with the developing devotion to the Divine Mercy in the forms conveyed by her. Pilgrims came to her tomb, to the monastic cemetery in Cracow-Łagiewniki, and obtained many graces through her intercession.

On the 21st October, 1965, Bishop Julian Groblicki, delegated by the Archbishop of Cracow, Cardinal Karol Wojtyła, began with a solemn session the Informative Process relating to the life and virtues of Sister Faustina, during which 45 witnesses to her life were interviewed, the writings were collected and the process regarding the absence of public devotion was conducted. On the 25th November, 1966, the mortal remains of the Servant of God were translated from the tomb, from the monastic cemetery, to the chapel. On the 20th September, 1967, Cardinal Karol Wojtyła chaired a solemn session which closed the Informative Process on the diocesan level. The acts of the process were sent to Rome and on the 31st January, 1968, the Congregation for the Causes of Saints inaugurated the Process of Beatification. On the 7th March, 1992, the Holy Father, John Paul II, promulgated a decree on the heroic virtues and on the 21st December of that year he issued a decree regarding a miracle. He also fixed the date for the beatification in Rome to be the 18th April, 1993.

Many years before the beatification, in the ‘Diary’ Sister Faustina described her way to the glory of the altar in the following manner: “One day I saw crowds and crowds of people in and outside our chapel, and out in the street, as there wasn’t enough room [in the chapel] for all of them. 41 The chapel was decorated in a special way, as for a feast day. There were lots of priests around the altar; then there were our sisters and many other congregations. Everyone was waiting for the person who would take up the place in the altar. Suddenly, I heard a voice telling me that I was to take the place in the altar. But as soon as I went out, that is left the corridor to cross the yard and go to the chapel following the voice which had called me, all at once everyone started throwing things at me, anything they had at hand – mud, stones, sand, brooms, so at first I hesitated whether I should continue, yet that voice was calling me all the more forcefully and in spite of it all, I carried on bravely. Once I had crossed the thresh[1]old of the chapel they all started hitting me – my superiors, the sisters, our charges, 42 even my parents – with whatever they could, so willy-nilly I was forced promptly to take up the place set aside in the altar. As soon as I had taken up that reserved place, [13] the same people, the charges, the sisters, superiors, and my parents – they all started stretching out their hands and asking for graces, and I didn’t mind they had been throwing all those different things at me; oddly enough, just because of it I felt a special love for those people, who had forced me to get into the place that was reserved as fast as I could. At that moment, my soul was filled with indescribable bliss and I heard these words, “Do whatever you wish; distribute graces as you wish, to whoever and whenever you wish.” Straightaway the vision was gone” (Diary 31).