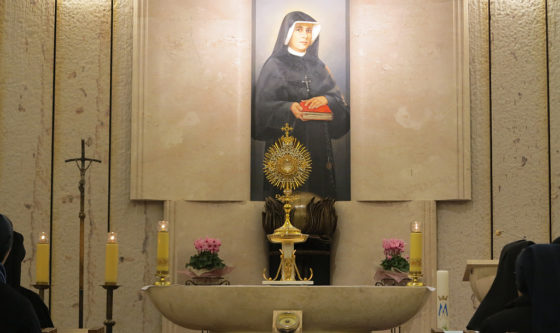 Every school of spirituality refers in some way to the most life-giving sources of sanctification, the Holy Sacraments. Sister Faustina regarded all the sacraments, especially the Sacrament of Reconciliation and the Eucharist, as great gifts of Divine Mercy. Jesus Himself uncovered before her the magnitude of these gifts. Tell souls, Jesus spoke about the Sacrament of Reconciliation, where they are to look for solace; that is, in the Tribunal of Mercy. There the greatest miracles take place, are incessantly repeated. To avail oneself of this miracle, it is not necessary to go on a great pilgrimage or to carry out some external ceremony; it suffices to come with faith to the feet of My representative and to reveal to him one’s misery, and the miracle of Divine Mercy will be fully demonstrated. Were a soul like a decaying corpse so that from a human standpoint, there would be no restoration and everything would already be lost, it is not so with God. Oh, miserable are those who do not take advantage of the miracle of God’s mercy! (Diary 1448).

Sister Faustina marvelled at merciful love of God present in every sacrament. The most she wrote about Jesus’ goodness who when departing from this world, wanted to remain with us and left Himself in the Sacrament of the Altar, opening ajar the door to His mercy. There is no misery that could exhaust You, she exclaimed in delight, You have called us all to this fountain of love, to this spring of God’s compassion. Here is the tabernacle of Your mercy, here is the remedy for all our ills. To You, O living spring of mercy, all souls are drawn; some like deer, thirsting for Your love, others to wash the wound of their sins, and still others, exhausted by life, to draw strength (Diary 1747). The magnitude of this gift, wrote Sister Faustina, cannot be comprehended by any brain, human or angelic; that is why, we shall only get to know it fully in eternity. If the angels were capable of envy, she confessed in another Diary entry, they would envy people Holy Communion, in which God unites with His creatures most closely. He does not enter into such close union even with the angels (c.f. Diary 1804).

The awareness of the magnitude of this gift was the reason why there arose within her a spirit of profound gratitude and great respect towards such a humble Divine majesty; there also arose a feeling of great love for the One who had loved man to the end, and was ready to give up His own life for sinful man, becoming for him the Bread, which gives eternal life. She got to know the divinising power of the Eucharist and she knew how to make good use of it; that is why, her life became totally transformed both in her thinking and actions; to use the language of St. Paul, the old man within her had died, and the new man, modeled upon Christ, in whom all faculties were harmoniously united and focused on the supreme good, that is God, was. The manifestations of God’s mercy in the Eucharist, are particularly visible in those aspects which were experienced by Sister Faustina. The Eucharist was for her an area of her personal encounter with living God; it was a space of her co-sacrifice, in which she offered herself up together with Christ for the salvation of the world as well as of her close union with Him in the Holy Communion.