The Apostolic Movement of The Divine Mercy 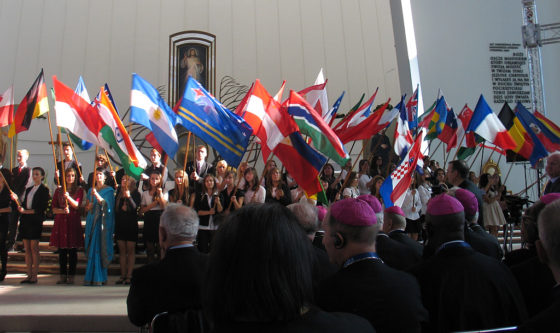 The spontaneously developing Apostolic Movement of the Divine Mercy was slowed down by the Holy See’s Notification of 1959 which placed a ban on propagating the devotion to Divine Mercy in the forms handed down by Sister Faustina. Then the Congregation of the Sisters of Our Lady of Mercy, and also the Marian Fathers in the USA and other centres, adapting the directives of the Notification, stopped to spread the life and Sr. Faustina’s mission, and among them the forms passed on by her. The 19-year long period of Notification – which Sister Faustina herself had predicted – turned out to be a blessed time during which the diocesan process about the life and virtues of Sr. Faustina was carried out, and Rev. Prof. Ignacy Różycki, performed an in-depth theological analysis of Sister Faustina’s writings and thereby laid solid foundations for the devotion to Divine Mercy in the forms passed on by her. The Congregation of Pallotine Fathers organised theological symposia devoted to the mystery of the Divine Mercy and the mission of Sr. Faustina, which resulted in the publications of books.

The next stage in the development of the Apostolic Movement of the Divine Mercy started with the withdrawal of the Notification of the Holy See in April 1978 and has lasted until today, involving old and new religious congregations, different brotherhoods, apostolates, communities, and individual people who undertake the task of proclaiming the mercy of God through the acts of mercy, words and prayer. A great influence for the development of this movement turned out to be the beatification and canonisation of Sister Faustina and also the teaching of the Holy Father John Paul II (e.g. the encyclical “Dives in Misericordia”) and his visits at the Shrine of the Divine Mercy in Kraków, Łagiewniki. Today the Apostolic Movement of the Divine Mercy embraces millions of people around the world, who in different ways continue the mission of Sister Faustina.