The Church of Santo Spirito in Sassia 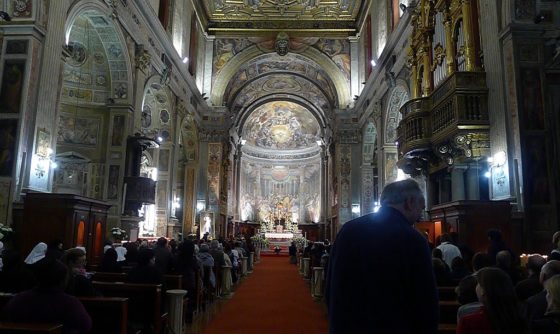 The church of Santo Spirito in Sassia (Holy Spirit in Saxony) in Rome is located near St. Peter’s Square (by the Vatican). Not only is it famous for its beautiful and very rich decorations, (it is adorned with numerous paintings, frescoes, and works of eminent artists from many periods) but it also has a long history of bringing mercy to the human spirit and body.

Already in the eighth century there was a church in this place called Santa Maria in Sassia, and dedicated to the Virgin Mary. The name of the church comes from “the Saxon school” – the place where pilgrims from Northern Europe, from the Saxon nation, received their first spiritual and material assistance. In 1198, at the request of Pope Innocent III, the first Holy Spirit Hospital in Europe was built next to the church. The Pope commissioned the construction and supervision of the work to Guido di Montpellier, the founder of the Hospital Brotherhood of the Holy Spirit in France. The Church and the Hospital of the Holy Spirit enjoyed a very good reputation not only among Roman residents but also among pilgrims. The hospital care gained recognition even in the eyes of Luther who, during his stay in Rome, did not hesitate to adopt a harsh stance towards the Eternal City. He spared only the hospital of the Holy Spirit.

The Church of the Holy Spirit was rebuilt by Pope Sixtus IV for the Jubilee Year of 1475, and later by Pope Paul III, who commissioned the work on the church to Antonio di Sangallo. The interior of the church, besides the main nave, has a number of chapels to the right and left, all of them richly adorned. The dominant theme of the paintings, on account of the hospital adjacent to the church, are evangelical scenes associated with the healing of body and spirit.

The third chapel on the right side is now dedicated to The Divine Mercy and to Saint Sister Faustina. In this chapel are located: the image of Merciful Jesus painted by P. Moskal in 1994; the statue of St. Sister Faustina Kowalska, the Apostle of The Divine Mercy; and her reliquary donated by the Holy Father John Paul II after her canonization. Previously, the chapel was dedicated to the Holy Trinity and to St. Philip Neri. The sixteenth century paintings are of the four Evangelists, and on the pillars there are figures of the four Doctors of the Church (Saints Augustine, Athanasius, Ambrose and John Chrysostom). On the dome, divided into three parts, there are paintings presenting: Abraham with the angels, Tobias restoring sight to his father and Elisha who cured Naaman of leprosy. On the sides of the altar there are paintings which present Jesus restoring sight to the blind man and healing the paralytic man.

The Holy Father John Paul II appointed the church of Santo Spirito in Sassia to be The Divine Mercy Spirituality Centre (from 1 January 1994). Fr. Józef Bart has been the Rector of the church since 1 March 1993. He comes from Katowice, but belongs to the clergy of the diocese of Rome. Since the beatification of Sister Faustina (1993) the church is also served by the sisters from the Congregation of Our Lady of Mercy.