The Feast of Mercy at the Shrine in Krakow-Łagiewniki 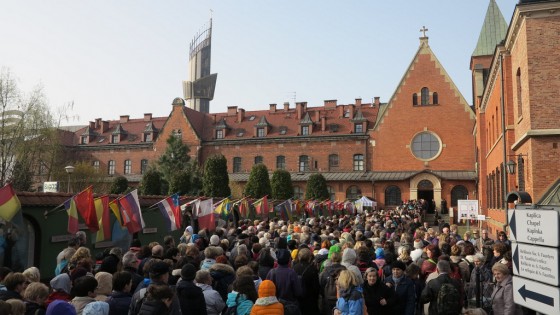 The first Sunday after Easter is celebrated as the Feast of Mercy. In this Jubilee of Mercy, more than 250,000 people from all continents and nearly 40 countries, even such far off as Eritrea, the Netherlands Antillen, the Guana Island, Congo, Madagascar, Mexico, Peru, Sri Lanka, Thailand, Uganda and Venezuela, arrived at the Shrine of Divine Mercy. About 460 priests awaited them at the altar and in the confessionals. More than 55,000 Holy Hosts were distributed during the Sacrament of Communion. About 100 nuns, more than 100 seminarians, police officers, firefighters, the Municipal Guards (in total, over 400 people), along with the Maltese ministry, church security forces and hundreds of volunteers served the pilgrims as well. The celebrations at the Łagiewniki Shrine were reported by 125 accredited journalists, including some from several TV channels which also aired broadcasts from the night vigil (TV Polonia, TVP 3) and the High Mass (TVP 1, TV Trwam, TVP Info, TVN and Polsat). Prayer at the Hour of Mercy and the Chaplet of Divine Mercy were broadcast by several Catholic radio channels, reaching about 250,000 listeners from the Łagiewniki Shrine.

Additionally, 41,000 unique visitors from 114 countries connected with the chapel of the miracle-famous Divine Mercy Image and the tomb of St. Faustina at www.faustyna.pl, where only one public Mass was celebrated (at 7:00 pm), and throughout the day, the sacred site was visited by crowds of pilgrims to make thanks and ask for graces. At www.miłosierdzie.pl, more than 77,000 thousand unique users from 65 different countries accessed the video stream from the Holy Mass in the basilica.