The President of Panama, Juan Carlos Varela and Panama’s Firts Lady in Łagiewniki 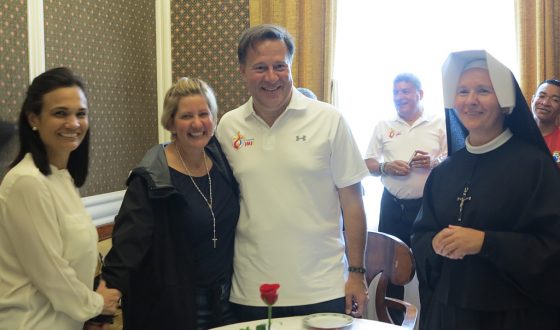 On July 31, after final Mass celebrated by Pope Francis on Campus Misericordiae in Brzegi, the President of Panama, Juan Carlos Varela, Panama’s First Lady, Vice President Isabel St. Malo with a group of companions visited the Shrine of Divine Mercy. They prayed with other pilgrims in front of the miracle-famous image of Merciful Jesus and the tomb of St. Faustina at the Hour of Mercy, and recided the prayer of the Chaplet of Divine Mercy. As a gift of gratitude to Merciful Jesus and St. Faustina, they brought a large basket of white roses. During the cordial meeting with the sisters of the Congregation of Our Lady of Mercy, which lasted for over two hours, the honorable guests also became acquainted with the heritage of St. Faustina. They received a gift from the sisters – the Diary in Spanish, in which Sr. Faustina enclosed Jesus’ message of mercy to the world, but also the story of her life with God. The First Lady of Panama, Mrs. Lorena Castillo de Varela, who had visited the sacred site for the first time two days earlier, sent the Superior General of the Congregation of the Sisters of Our Lady of Mercy a flag of Panama with a request to pray for this country, which will host the next World Youth Day in 2019.