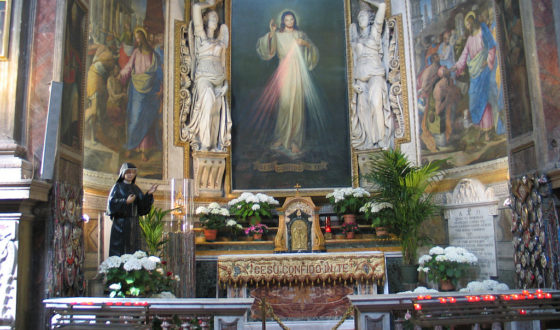 The sisters of the Congregation of Our Lady of Mercy have been serving in Rome since 21 November 1978, when a religious house was founded in the “Bohemian College” at 1 Via Concordia, which then became the background for the smooth management of the beatification process of Sister Faustina.

Before the beatification of Sister Faus- tina the sisters were invited to work in “The Divine Mercy Spirituality Centre” created by the Vicariate of Rome at the Church of the Holy Spirit. Fr. Józef Bart was appointed the Rector of the church. On 1 May 1993, right after the beatification of Sister Faustina, two sisters came from the house on the Via Concordia to work in this church and on 8 December of that year, once the apartment had been made ready, the sisters moved permanently to the house at 12 Via dei Penitenzieri. At the beginning of 1994 (on 14 January) the house of the Congregation of the Sisters of Our Lady of Mercy was canonically established in this place for the work of spreading and interceding for God’s mercy for the Church and the world.

The sisters support the work of the Rector of the Church of the Holy Spirit and of the Italian Divine Mercy Spirituality Centre: they take care of the liturgy; they take care of the practice of the various forms of the devotion to The Divine Mercy, as given by St. Sister Faustina: they deal with translations, publications and distribution of books and various materials related to the life and mission of St. Sister Faustina; and in addition care for the church itself. The church is visited every day by a large number of Romans and by pilgrims to the Vatican. The rapid development of the Italian Centre of Devotion to The Divine Mercy and of Saint Sister Faustina is due not only to the ever-increasing popularity of the devotion to The Divine Mercy and the widespread recognition of her holiness as the Apostle of The Divine Mercy, but also to the Centre’s close proximity to the Basilica and St. Peter’s Square. Hence, pilgrims from many countries, not just Italians, come to the Italian Spirituality Centre.