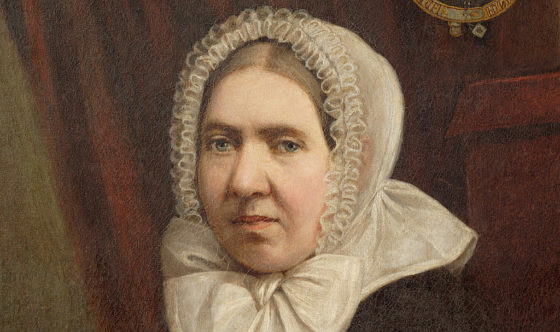 Mother Teresa Potocka was born on 22 October 1814 in Warsaw. She was the third daughter and third child out of the five children born to Prince Antoni Paweł Sułkowski and Ewa Kicka, and she was christened Ewa. Teresa lived in the castle in Rydzyna and, when her mother died, was cared for by her father, who took care to bring up and educate his children in a true Christian spirit and in patriotic love of Poland. In 1838 Ewa married Count Władysław Potocki from Chrząstów near Częstochowa. The couple had no children and after her husband died she began to think about a total dedication of herself to God and the founding of some work of mercy. On the advice of her spiritual director Fr. Zygmunt Golian, she went, together with two friends, to Laval in France. There they put themselves under the direction of Mother Teresa Rondeau and set themselves to learn her order’s methods of working to restore morally fallen girls and women. The future Mother Potocka completed the novitiate at Laval and, during the ceremony of taking the veil, was given her new name in religion, Teresa. Returning to Poland, she brought with her the experience she had gained and the Rule, to serve in keeping the same lifestyle as the sisters in Laval and doing the same apostolic work, but in an independent institution. Back in Poland she accepted the invitation of Archbishop Zygmunt Szczęsny Feliński to take on “The House of Refuge” in Żytnia Street, Warsaw. This House was consecrated on 1 November 1862, the date now understood to mark the beginning of the Congregation of the Sisters of Our Lady of Mercy in Poland. In 1868 Mother Potocka opened the House in Kraków.

In 1878 she agreed to the proposal by the Congregation in Laval that the two religious congregations should merge and together seek to be officially approved by the Holy See. Once the decree of approval (decretum laudis) was received from the Holy See, Mother Potocka directed the Polish Houses as the Vicaress under obedience to the Superior General in Laval. Mother Teresa Potocka died and was buried in Warsaw. After a long sickness, she died on 6 July 1881 in Wilanów, and her final resting-place was the tomb of the Congregation in the Powązki Cemetery, Warsaw.